SPLASHNEWS-Review of Maccabeats “Out of the Box” 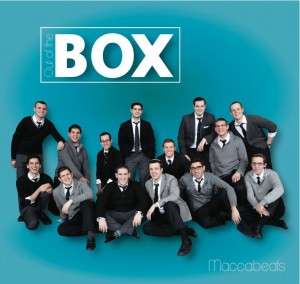 SPLASHNEWS- So you thought the Maccabeats were a passing phase; they’re not! Their newest album, titled “Out of the Box”, can just blow you away. The talent that is involved and evident in this group from Yeshiva University is unbelievable. I really like the title of the album with it’s double meaning. Out of the Box represents the long way that they have come from the first album and really since they stepped “out of their boxes” from the viral Candlelight video. They have performed literally all over the world including the White House and up in the sky in New Zealand while getting ready to sky-dive! The title also represents their Modern-Orthodox views of Torah U”Madda which they translate to mean living “Out of the Box” which they say means being “fun, creative, and committed to to serve G-d with all of our energy, faculties, and resources”. To continue the quote, “We remain committed to to bringing meaningful content to Jewish music, with our hearts and minds in the right place, while celebrating the good and exciting parts of modern culture”. Many songs in the album indeed contain meaningful messages that are brought out expertly by the voices of the Maccabeats. One reason why I like the album is the fact that they remain truly acapella and don’t change their voices at all in studio to sound like instruments. I am not even getting into the sefira argument, I am just saying that I appreciate the talent that is involved without any distortion. I personally think that if you are turning your voice digitally into a guitar/horn etc., you might as well use real music because it will sound better. (just saying my opinion…no need to yell and scream).

This article  can not be complete without mentioning another group that is knocking on the door. I am talking about the Y-Studs, another group from Y.U. that has just released their debut album and I must admit is quite good. Now, obviously if you compare it to Out of the Box, of course no question which is better, BUT, if you compare it to the Maccabeats debut album… The question is, what does it mean for the Maccabeats? They will be forced to up their game and we will see better music from the two groups. I personally think that the Y-Studs have what it takes to compete and the group that comes on top will be the one that has better marketing and of course, mazal. Now, let’s take a look at the album.

1-Come Back- Originally from the Moshav Band, this a great opener. Arranged by Julian Horowitz. I might have cut the intro in half but I can see why they wanted it so long as it is the first song and it acts as a teaser. I love the bass harmony which starts at 2:12. Also, great “drum work” at 3:04! Soloist, Noey Jacobson. Very exciting song but can get a little monotonous. 4 out of 5 stars

2-K’shehalev Bocheh– This song is originally from Sarit Hadad, which I had wondered about because it is featured on the new Shloime Daskal where it says that it is from Meydad Tasa. After some research, it is indeed Hadad’s. Arranged by Yonatan Shefa. Soloists, Josh Jay and Yonatan Shefa. This is a gorgeous song that I loved from the first time I heard it. The lyrics blend beautifully with the melody. 4 1/2 out of 5 stars

3-Yavo-From the Miami Boys Choir, this song arranged by Julian Horowitz, starts off mellow and then picks up at 0:42 where the beat kicks in. Nice harmony there as well. Great job breaking it down at 1:03. They also kept many of Miami’s original harmonies which is fine with me. Oh, btw check out some pretty solid bass starting at 3:04. Soloist, David Block. 3 1/2 out of 5 stars

4-When You Believe– This song, arranged by Immanuel Shalev, was a first for me and I think it is very nice but I am not too crazy over it. The harmonies were kept simple and delicate. Also featuring a bridge to the words Ashira Lahashem… I would have only sang the bridge once without speeding it up because I think this detracts from the beauty of the song. Soloist, Jeff Ritholz. 3 out of 5 stars

5-Modim– This song is sung by Nachum Joel and Chanina Abromowitz. Yes, that one, formerly of the Miami Boys Choir. This song is of a slower pace and a very relaxing listen. If you are in the car, you will probably skip it! I like how the beats and harmonies break off at 1:00 for the soloist to say the word “vaed” and come back in less than a second later. Arranged by Deke Sharon. 2 1/2 out of 5 stars

6-Keep Your Head Up– This is a very fun song with great lyrics; perfect listen if you are in a bad mood. Arranged by the more famous Mike Boxer and sung by Nachum Joel. Great arrangements and beats. Only downside is that the high part with its harmonies can get a little repetitive. 4 1/2 out of 5 stars

7-Habeit– This classic from Abie Rotenberg has been sung at almost every camp cantata and will continue to be sung. This song has masterful vocal arrangements by Mike Boxer. Great low harmonies starting at 3:54 and amazing bridge at 4:25. I must have listened to that bridge over ten times until I was able to master it! Soloists, Meir Shapiro and Mordy Prus. 5 out of 5 stars

8-Rau Banim– This Yonatan Razel masterpiece was originally sung by Yaakov Shwekey and the Maccabeats did a great job. The song starts of with the original flute track from the Shwekey album. Wait, no sorry, that’s someone whistling! Great job with that. 2:47 features a bridge that I’m pretty sure they made up. It adds a bit of zazz to the track. I must admit that the song does not sound as good without music but what can you do? Soloists, Buri Rosenberg and Ari Lewis. 4 out of 5 stars

9-Miracle– Arranged by Mike Boxer, this song more like a rap which I guess is a little different but not my style. Interestingly, it is not even 3 minutes long. Soloists, Noey Jacobson, Jeff Ritholtz, and Michael Greenberg. 1 1/2 out of 5 stars

10-Kol Beramah– This is from the smash hit single by Simcha Leiner who is also featured on this song. Amazing job all around; this song can give you the chills. Enough said. Soloists Michael Greenberg and Yonatan Shefa. 5 out of 5 stars

11-Never Say Never– This is a great driving song. Although I can’t really figure out what some of the lyrics are referring too, I am quite impressed with the professionalism displayed in this song. Arranged by Tom Anderson and sung by David Block who does a fantastic job on the vocals. 4 1/2 out 5 stars