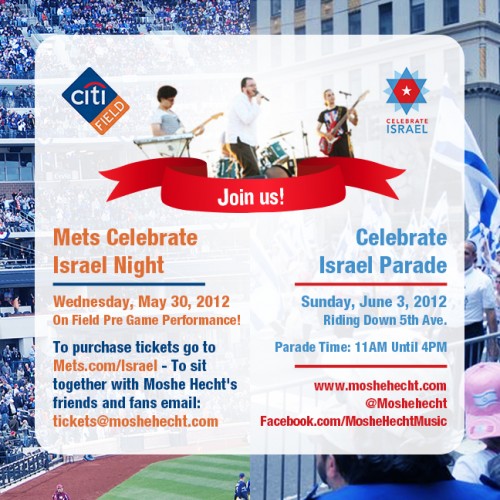 Just seven months after the release of his debut album “Heart is Alive,” Chassidic singer-songwriter Moshe Hecht will be performing in two New York events celebrating the Holy Land.

When the New York Mets host “Celebrate Israel Night” on May 30th, Hecht and his band will be performing for scores of fans and Israel supporters in a pre-game jam. Then, on Sunday June 3rd, Hecht and his band will perform on the main float (hosted by event organizers JCRC – NY) at the Israeli Day Parade.
“I’m humbled,” says Hecht about being chosen to perform at these large-scale New York events,”Not only do we get to perform at CitiField and on a float of all things, we get to help our city celebrate and support Israel by simply doing what we love.”
To purchase tickets to the game, go to Mets.com/Israel.
To sit together with friends and fans of Moshe email tickets@moshehecht.com
For more information visit www.moshehecht.com