HILLELKAPS : Review of AKA PELLA V 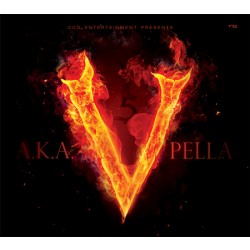 I like to start my reviews off subjecting my readers to a quick word about the artist/musician/singing group so here goes. Aka Pella has set off a musical explosion since they started releasing their material. This is by far the wildest acapella group in the Jewish Music World and their motto holds true. “So Good It Should Be Assur”. Lets get started

1.Kulam Ahuvim Telephone – The album starts with a cover of MBD’s Kulam Ahuvim. Although I am not going to go into detail on the tune that the song is mashed up with, they definitely have their sounds right.

2.The TGIF Medley II – I love the flow of this song, especially the rap towards the beginning. I’m am curious though why they used the same tunes as Six13’s “Good Shabbos” Video. Either way they really made the words fit well.

3.Moves Like Nilli Milli – I think its awesome that the theme for “The Good, The Bad, and The Ugly” starts off this track. Featured on this track is the multi talented Yitzy Spinner singing a cover of MBD’s “Im Ain Ani Li Mi Li” We’re only at the 3rd song and already they have covered 2 MBD songs, I can only assume that C.D. Eichler (the producer) is a fan. I still crack up when I hear Yitzy sing “I’ve got the moves like Modche”.

4.7th Heaven – This song featuring Avi Ganz (I’ve actually gotten the chance to play with him myself and he’s a great musician too) is a cover of “Hashamayim” originally performed by Shloimie Gertner. The song continues with a Cover of “Mimkomcha” Originally on “Ad Bli Dai” performed by Yaakov Shwekey.

5.This song takes the song “Tick Tock” from Shea Rubinstein to the next level. This is a great remix to the original song.

6. Moshiach/Moshiach – This track features a Cover of “Moshiach” off of Benny Friedmans first album as well as “Moshiach” From the Miami Boys choir.

7.No Lyrics – Another of the songs of off Benny Friedmans first album is covered here, the famous “No Lyrics Nigun”. There seem to many many Niggunim that pass through the Jewish Music World but this one has stuck around for quite a while.

8. Pruz Control – For those of you who recognize the intro to this song I think we can all agree that it is awesome!!  This song is a mashup of awesome songs from Michoel Pruzansky featuring the voices of Shloimie Kaufman (who is actually the original performer of Zeh Lazeh) and Simcha Leiner. This mashup consists of Taaseh Mitzvah, Letav Avid, Al Yisroel Shalom, and Zeh Lazeh. We all know that Simcha Leiner sounds good on slow songs (ex:Kol Berama) but this is solid proof that he can really rock a fast song as well.

9.Birchos Avicha / Birchos Habanim – This song features covers of Dovid Gabay’s “Birchos Avicha” and “Birkat Habanim” by Ohad. I like how Aka Pella made sure that the tracks that feature more than one song, incorporated songs that had a connection to one another.

10. Ya’alili – This song seems to be one of the most popular on this album and listeners can’t seem to get enough of it. Aka Pella took the original concept of the song “Ya’alili” and blew it completely out of the water. The group alternates through different stereotypical things normally associated with Ashkenazim and Sephardim (and as you’ll hear… Syrians) and pokes some good natured fun at them. There’s a little something for everyone in this song and it is sure to get you to crack a smile.

11.Aravim – As the name of the song suggests this is a cover of the song “Aravim” made famous by the one and only Yaakov Shwekey. This song features vocals by Shloimie Kaufman and Simcha Leiner as well as special surprise vocalists….. The Shira Chadasha Boys Choir directed by Nachman Seltzer from Eretz Yisrael. If you take a look at the booklet (when you buy this album of course) you will notice that Eretz Yisrael is just one of the many places this album was recorded in. I am a big fan of this approach. There are many musicians/singers/arrangers that can help add something to an album, and I appreciate when artists get input from others instead of doing it all in one place with the exact same people.

12.No lyrics “Old School” 90’s alternate version – If you thought that the “No Lyrics” Nigun was only going to get featured once in this album, you are incorrect. Aka Pella decided to give it another remix . This song features on some of the popular sounds of the 90’s. For those of you who “get” all the references, you might appreciate it more than those that don’t but the ones that don’t will still appreciate this fresh (but old school) take on the song.

13.Cutting Room Floor/ Outtakes – As if the album wasn’t enough, Aka Pella decides to give us a sample of some other tunes that could have potentially made it on this album as well as some hilarious outtakes recorded throughout the making of the album. In this track are 6 “sub-tracks” all of which have something which is so good, it’ll make you wish they had added it to the album. Even though they didn’t, luckily they decided to share this piece with us so we could at least hear a snippet of it.
All in all this CD may not be for the faint of heart (Just kidding) but it definitely is pretty wild (in a really GOOD way!) Regardless of your opinions regarding a cappella music during Sefira, this is definitely an album that belongs in your Jewish Music collection because whether or not you will listen to it during Sefira you will find yourself listening to it throughout the year. I definitely recommend this album and I’m excited for all the future Aka Pella albums although I have no idea how they are going to top this one.