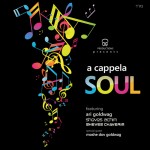 Ari Goldwag does it again! This time in a capella format in time for Sefira and the 3 weeks. However, this isn’t boring like other Sefira albums without music. Ari puts his heart and soul into this album to lift up and inspire all listeners both young and old. He adds beautiful harmonies and human sound effects to complement the singing.

This is mostly a collection of songs from previous albums – his own, Sheves Achim 1 and 2 , and Sheves Chaveirim. However, he also put in a few new ones.

1.  Naya Niggun – Just as the name says, this is a new song or “nigun” because it’s without words. Some people would claim that this mimics the Neshoma Nigun from Carlebach. However, my feeling is that this is deeper and more leibedik and geshmak.

2. Mi She’ana – This is a slow, hartzige song from Sheves Chaveirim. The words are from Slichos and in my family this gets lots of attention around the Yomim Noiroim. Usually , a capella songs lose the intro. to the song, but Ari sings it and in some ways even nicer than the music. Yair Frohlich has a major part in this song and his voice is phenomenal! If he would have been in Miami Boys Choir he would have been up there at the top of the list with Ari Goldwag and Oded Karity or more recently Yossi Schick, Shaul Elson and Binyomin Ravina Hershkowitz. He sings a really high harmony at the last time around from the high part. It also features Ari’s son Moshe Dov. His voice is great especially for a 6 year old.

3. Sha’arei Shomayim P’sach – Another song from Sheves Chaveirim and it’s one of the real fast songs. It reminds me of Loi Lonu from the first Sheves Achim. This proves that a capella can be great even with a fast song. It also features amazing harmonies from Moshe Dov Goldwag.

4. Ki Nicham – A hartzige song sung by Ari himself with beautiful harmonies. The words are appropriate for the style of a sefira/3 week album. His range is just breathtaking in this song.

5. Finally Here – Originally sung by Ari himself and distributed for free on his website. It contains a potent and important message that gets us to introspect inside ourselves if we are truly yearning for Moshiach. Then it also appeared on Sheves Chaveirim. This time Ari himself sings the 3rd time around and you can tell he really means what he sings and his yearning to connect to Hashem. It sounds great even without the music because the voices and harmonies are outstanding!

6. Kah Riboin – One of Ari Goldwag’s all time hits that appeared the first time in Ruach U’neshama Band and later in Ari’s own album Lishuoscho Kivinu and in Shabbos Get Ready with Ari, Yitzy Spinner Oded Karity and Nochum Stark.

8. The Artist – This is the only song from Sheves Achim #2. The only difference is that Ari sings it himself. It’s a beautiful Mashal about how everyone is valuable no matter how small or insignificant he feels. Composed and lyrics by Dovid Klaver.

10. Superman – It’s from Sheves Achim #1 an English song about a kid who dreams about becoming Superman, while he ends up learning in Kolel and is indeed his family’s Superman. In this version, Ari himself joins in the last part of the song.

11. Ogil – from Sheves Achim #1 and originally from Shabbos Get Ready. A nice catchy song that can wake you up if you’re feeling a little groggy.

12. Aleinu – Originally from Ari’s album Lishuoscho Kivinu where he sings with himself as a young boy. This time he sings with his son Moshe Dov. It’s touchy how you see the generations m0ving and “giving over the mesora” from father to son.

13. Hashem Loves You – This comes from Sheves Chaveirim and it just came out in a music video as well available here for free:

Ari put in a special avodo into this song. He told me that he felt it was a great idea to compose a song where one can repeat the words to himself and be mechazek himself in Avoidas Hashem or just improve his well-being. This song fits that concept to a tee. Everyone knows that Hashem loves him, but many lack in internalizing that powerful, eternal truth. So by singing the lyrics to yourself, you can lift yourself up in every situation. The tune itself is very catchy and upbeat and fitting to the words. I carry a printout of the song in my pocket and take it out constantly to review the words and hopefully it will give me an experiential insight and sink in permanently.

I hope Ari is very successful and does very well with this album. The better he does, the better Klal Yisrael does because that means we are getting his message and growing spiritually. Also check out his website at www.arigoldwag.com and you will see that Ari is not just a singer, but rather a great Ben Torah with many fantastic shiurim. His audio shiurim are featured on Torahanytime.com and he has articles on Aish.com.