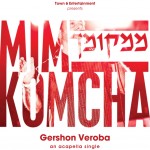 Last we heard from Gershon Veroba was May 30th, 2011, Yom Yerushalayim, when he released the single “Up To Jerusalem” a cover of the MEGAMA/Moshe Yess mega hit. After over 4,000 downloads, he received personal accolades from the Yess family, who say it was exactly as Moshe would have wanted it and that no one else could come close. While GV is also known as the Variations/Impressions king, that single was another look into his “other” side. Gershon is first and foremost an amazing singer/composer/musician/producer who has been setting standards for the entire Jewish music business for decades.

In 2009 Veroba tried something new. He released his first EVER acapella single “Little David“, a cover of “The Fight In The Man,” yet another MEGAMA hit. That song brought is over 8,000 downloads to date and still counting.

Now Gershon is back with an all new acapella single, “Mimkomcha,” a song he composed and featured on his first album. While the classic Veroba voice hasn’t changed, the acapella style/production on this single has. “It’s a bit more grand then last time,” says Veroba. “Little David” was a cool, blues song and I had only a day to produce it, so I kept it simple and funky. This time I was more comfortable and ready for a new challenge with an old song of my own.”

The single is a FREE download. All you have to do is visit www.veroba.net. When asked what he is currently working on Veroba responded, “A new single that will hopefully be released before the summer”. “People seemed to respond well to songs like “Ana Avda” from the Reach Out album and “Tzur” from Impressions, so I’m following along those lines. I know you’re gonna love this one!”