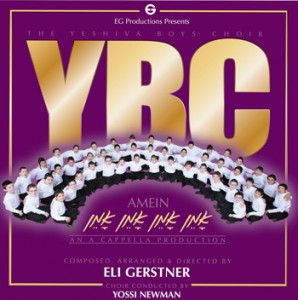 SPLASHNEWS- So its that time of year again, the one that’s really hard on us music lovers. Yes, it may be sefira but Eli Gerstner, together with Yossi Newman have given us more than just something to listen to, with this newest version of the Yeshiva Boys Choir all done a capella! This cd features a great assortment of songs including the already popular Amein Amein Amein Amein. Wow, that’s a lot of ameins! This brand new song is an upbeat song and very catchy. You may ask how you can have a catchy song with no music but Eli Gerstner suprises us with his amazing drumming. No, not with drums, but with his mouth! Without any computerization, I must say I am highly impressed. Most songs on the album feature these “drums” and this really adds a lot, without leaving you wondering if it just might be music… The album also features some heartwarming slow songs including Odcha and Ess Ponecha from the Chevra albums. The beautiful Eishes Chayil which was composed by Yossi Newman (originally for a color war song) is also featured on the album. Yisimchu and Hayom are the more funky songs and really fun to listen to. Yisimchu also has something we haven’t heard on previous YBC albums, which is an authentic Israeli soloist. I think this contrasts beautifully and I would like to see more of this in the future. My favorite song on the album is the brand new Al Naharos Bavel which was written by Eli for the three weeks. It is a stunning song with great solos that really bring out the high part beautifully. This song is sure to be a hit in many camps this summer. At the end of the album lies a real treat, with the super popular Ah Ah Ah done in acapella, although I must admit almost had me checking to see if this one has music! It sounds that good.  Many people are asking me why they would put out a sefira album? Well, for that and much more, you can read our interview with Eli Gerstner right here on JMR. Just click on interviews in the news section and see SPLASHNEWS-Jewish Star. All in all this cd will please kids of all ages as well as adults who enjoy the angelic voices YBC.