[Video] Yom Hashoah 2012: The Making of Rainbow in the Night 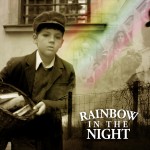 In honor of Yom Hashoah, executive producer and composer Cecelia Margules shares her personal story in this newly released clip depicting the making of Rainbow in the Night, the epic Holocaust YouTube video released several months ago.  The clip features previously unseen footage of the video as well as an interview with producer Danny Finkelman.