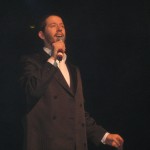 JMR is extremly excited to present another new feature, as we continue to be your number one destination for all your Jewish music news and information. JewishMusicReport is the ONLY website dedicated 100% to Jewish Music – and nothing else. We have continued to grow into the largest website on the internet that covers Jewish Music with over 10 writers on our staff, and we are proud to introduce yet another, who will be doing artist bios.  First up, the great Shloime Gertner!

I’m hoping that Shloime will release a new album soon! I’m sure you do too!