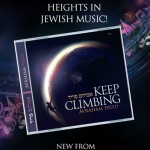 How many artists out there are there whose CDs you’ll get as soon as they come out, because you KNOW that they’re going to give you value? Top on everyone’s list would be Avraham Fried, and it is no surprise that Keep Climbing is a keeper. Every time through this record I love it more, and it has enough in the way of styles and creativity to be sure to please just about everybody.

For one thing, Fried’s voice is superb. He’s reached a point where he can do just about anything he wants with it, and it’s always under absolute control. Throughout the album, you never get the feeling like he’s doing something that’s pushing it or beyond himself. And that’s true alongside the fact that I’d have to say this is Fried’s most creative effort to date.

You get that feeling from the liner notes – the personal reflections on each song are worthwhile and meaningful, and they add depth. Fried said publicly that he chose the lyrics of each song, and that in itself gives me more appreciation for the total value. There’s a balance between the songs that are deep pleading to Hashem and the tunes that reflect joy and spirit. Check back with me in a year on this one, and despite my occasional critiques, I really think this is one for the ages.

Hafachta: (****) What a great opening tune! This song really jumps! The lyrics are perfect, and Fried expresses each word with energy and feeling. It opens with an 80’s pop bass and brass line (anyone remember Rechnitzer Rejects’ “Satmar” song?) but doesn’t get dust blown all over you, as the production is thick and solid. I absolutely loved the Irish flute at 2:54, followed by the return of the heavy bass. The “Simcha, simcha” interspersed throughout the song gives it character, and the inflection of the word is changed often, keeping it from getting stale. Great opener.

Yehalelu: (***) This clarinet/accordion-led waltz is a thing of beauty that calls to mind a bygone era of Jewish music. As soon as I heard it, I thought it brought to mind Gerrer niggunim, and I can hear it sung by R’ Dovid Werdyger. Well, baruch shekivanti, because Fried apparently thought so as well – he writes that it reminded him of Yankel Talmud. Production is good – particularly with the clarinet, and the eidel solo at 2:51 – but the choir is a bit flat. This remains a minor issue on a few other songs over the album, but here, the song could have used some serious choral treatment. The slack is picked up by Avremel himself, as the best harmonies are his own. I was surprised at the placement of the song on the album – second? But hey, that’s just nitpicking. I also would have pulled the power of the choir up to tops for the ending.

Vezakeini: (***) A dreamy harp and violin starts this beautiful tune. The composition reminds me a lot of Yisimcha (from Bracha Vehatzlacha), so if you liked that, you’ll probably love this one as well. Avremel enunciates each word with plaintive kavana, drawing out the meaning of this beautiful prayer into the melody with the greatest of skill. I don’t rate it that highly, despite the beauty of the tune, only because it is so similar to past songs. The bridge, and its Yiddish words assist it somewhat. Easy to sing, this one will probably become a camp Friday night favorite.

Ain KeEilokeini: (***) A return to the ‘80’s with the electronica intro got me a bit worried the first time through the album. I’m not crazy about the first stanza, with the false Poilisher accent (although Avremel gets a pass, as his family comes from Poilisher Chassidim) and the repeated words, but the song really moves onwards. And with the forceful Yiddish translation/elaboration, the song really comes alive. This style of song – with the lyrics both from classic sources and transferred into another language – works very well for me. I think it adds a lot, by making it more meaningful and down-to-earth. (Many old niggunim use this method successfully; you may remember Lo Luni on Lipa’s Likroi Es Hahalel, Lecha Dodi on Tzlil V’Zemer’s Wake Up Yidden, Yankel Yankel from Fried himself, and there are many others.) Good guitar work – mostly with pressure on the wah-wah pedal – throughout the song gives it even more color.

Retzoineinu: (****) Avremel begins this piece with a laid-back cantoral piece, similar in style and concept to Ki Hamitzvah, from his album Aderaba. He exhibits no strain and absolute precision in his vocals throughout. I actually like the fact that he didn’t spend too much time on it, moving instead over to the very beautiful melody itself. Avremel exudes emotion, as he is obviously taken by these lyrics, and for good reason! I’ll bet you never look at this Rashi the same again. The children’s choir, the only one on this album, is perfect – no stretching, and all the kids are in sweet precision with each other. Great job there! Fried belts out a rousing crescendo as his finish of this beautiful piece.

All of that was good. But the second half of the album is truly great.

Kach Es Sheli: (****) Rock. Solid. Lyrically, this is awesome – but even more so as a conceptual follow up to Retzoneinu. Now, while it seems like this song had been produced earlier, I’m not sure how many of us were aware of that original by Yisrael Parnes. Whatever the case, another superb job here – with fabulous back-up vocals and spot-on drums. The rock guitar adds a level of raw angst that can be ratcheted up a few notches only when someone decides to make a heavy metal version of this song. Anyone? In any case, Avremel puts power and raw pain particularly into the Yiddish lyric section that will rip your heart out.

Keep Climbing: (*****) Minimalist beginnings remind me of My Fellow Jew, but this is a better song than that. The message is spot on – and I’ll admit, though this may sound cheesy, it touched me on a day that I was struggling. So for that alone, I’m going to give it good marks. But besides for that, it’s a beautiful craft, with simply outstanding vocals and harmonies – particularly from the bridge and onwards. The words “Don’t let nothing stand in your way” remind me of the Medrash about Avraham Avinu – on his way to the Akeidah, he was slowed by various obstacles, including a rushing river. He walked in until his neck, and when it threatened to wash him away, he called out to Hashem, and it disappeared. It was revealed to have been an attempt to distract him, but truly nothing in the end. What a great perspective on challenges – don’t let “nothing” stand in your way! Besides for the basic interpretation of the song, I wonder if Avremel is talking to his fellow Chabadniks with his message here, or am I reading too much into it?

Amen: (****) This brings us back into the Jewish music of the ‘90’s. It’s a fun tune, composed by the unheralded and under-appreciated Mendi Gerufi. (Give his Eretz Asher Tomid one more listen – that’s an album that deserves more attention than it got.) I wonder why they went with the pronunciation “Yisborach” as opposed to “Yisborech”, which is as Chabadniks pronounce it? Was that decision made based on the sentence structure, or is there a nusach that says it in exactly that fashion? And as it seems to me that dikduk would be on the side of the pronunciation here, why does Nusach Chabad say it the way we do? I’ll have to look this up.

Lomoh Hashem: (*****) Ruli Ezrachi did the arrangements on this song and the next, and I give him major props. From the opening harmonica (if it’s a synth, it’s fooled me pretty well), this tune takes you on a real ride. I absolutely love the combination of the possuk and the English lyrics, as simple as they are. And with yet another terrible tragedy still flickering before our eyes, the song takes on even more urgency, if at all possible. Avremel gives it his all – passion, pathos, pleading and sincere. The pizzicato flowing behind the arrangements are gorgeous as well. Love it.

Shaarei Mizrach: (*****) Yeah! This snazzy Mizrachi dance track is sure to become a major hit, and again, Ezrachi pulls it all together perfectly – choir, vocals, instrumentation all snap together for this hot number. Gotta love the bridge at 3:01. And for a Sephardic style tune, you have to give credit to the very un-Sephardic sounding composer, Elimelech Blumstein. I’d love to hear Meydad Tasa or Chaim Yisrael join Avremel on this and see what happens. Avremel does hold his own with his Mizrachi wailing at 3:31, but again, he doesn’t force anything and it comes out sounding very natural. Admit it – after hearing it the first time, you hit repeat. Which is what I’m going to do right now. :-)

Elokai: (***) While the vocals have the fire of a live show, the arrangement does nothing for me. That’s really too bad, because this is a beautiful song, and Fried obviously loves it. But why does it only get a single run though the first time around? It makes the song too rushed into the energy of the second and third stanzas. The choir, again, is too thin for my liking. Maybe it’s an Israeli style that doesn’t resonate well with me, as I’ve heard it on a few albums that had Israeli backing vocals. Whatever. At the end of the day, it’s still a beautiful song, and worthy of your ears.

Light: (*****) More Hebrew/English fun in this snappy song by Yitzy Waldner. Someone somewhere is going to make a great music video off of this creative and beat-y pop song. The music itself conjures shafts of light, and some nice guitar picking glues it all together. The bridge is a bit weak lyrically, but it works out fine. Another song that it’s just great to listen to and great to sing along to.

Heimoh Heimoh: (****) Funky opener brings us to a song reminiscent of Jewish music in the 70’s, but with excellent vocals and tons of energy. Fried and Co. revel in this classic simcha-style piece, and the horns go at it with gusto. A pile of false endings amid the scattered harmonic overdubs, alongside a few beat swaps interspersed within, point to guys having lots of fun in the studio. The result is fun on this side of the stereo system as well.

So, let’s look at it all: Message/content? Check. Creativity? Check. Mix of material and styles? Check. Vocals? 5 stars. Song choice? 5 stars. Emotion? 5 stars. Joy? 5 stars. While I usually find things to complain about, there just ain’t that much to be bugged by – the only thing in my book would be the order of songs, as I think the first (and weaker) half of the record should have been more evenly distributed across the album – and there’s just so much to love on this sparkling record. If nothing else, Avremel does a better job combining emotional and vocal skill than anyone else has done in a very long time. This album simply has something for everyone, and I think it’ll remain a classic for many years to come.