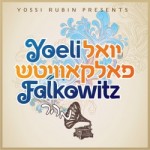 In the world of Jewish music today it can be difficult and, at times, nearly impossible to get noticed on a large scale. Obviously, the production of an album goes a long way towards achieving that goal; but in order for the aspiring artist to be further recognized, there must be something special or unique contained within. One such individual who has recently accomplished this is Yoely Falkowitz (or maybe it’s just plain Yoel? I’m not sure what to think after seeing the album cover). Not only does he have a sweet and surprisingly well-trained voice, he’s even managed to get some of the elite composers, arrangers, and musicians on board for what is truly a fantastic musical ride! I may be completely off the mark here (and please let me know if I am), but I would venture a guess that he’s somehow related to Levi Falkowitz of Freilach Orchestra and The Shira Choir. He sounds very similar to him. Ok, enough with the tedious introductions. Let’s get started with the main reason why I’m up at such an unearthly hour typing this.

Brochos V’hodaos- The album starts off with this upbeat freilach that sounds like something Shwekey might’ve had fun with. It’s not a favorite of mine but it still has plenty of potential. Eli Laufer composed the song and arranged the music as well as the choir. 7 out of 10 stars.

Maher- This is a very nice and soulful tune composed by Yitzy Waldner. It’s not very “Waldner-like” as he usually tends to sway more towards the love ballad genre. Nevertheless, he did an excellent job on the song with Yoely matching the feat with his superb vocals. The arrangements (which are sweet and to the point) were done by Shua Fried.  Moshe Roth enhanced them with his own choral arrangements. 8 out of 10 stars.

Chazi Chazi- The hard rock beat in this song will have you up and dancing in no time! The intro sounds like something that could be used to introduce the chosson and kallah. I really love the “not-your-typical-Jewish-rock” arrangements by Ruvi Banet which feature some great guitar and organ tracks (probably a keyboard sound). Ruvi also lent his expertise with the choir for this thrilling song composed by the prodigious Meshulam Greenberger. 7.5 out of 10 stars.

Shuvi Eiley- The second I heard the pizzicato strings in the beginning of this melodious waltz, I knew I was dealing with another Yoeli Dikman masterpiece. Although I feel he sometimes puts a little too much into his arrangements, he seems to have managed to keep them relatively simple, yet with just enough complex and non-standard chords to keep you interested throughout. He also arranged the choir. Yoely’s (the singer’s) clear voice really shines through in yet another Meshulam Greenberger gem. 8 out of 10 stars.

Kol Yisroel Areivim- This song has as good a chance as any to become an instant hit! Something about it just oozes happiness and makes you smile from ear to ear! Yossi Green does the backup vocals on this disco (as is his custom with most of his compositions) which only serves to transform it into an even better and more fun song. It was arranged by Shua Fried with the choir done by Moshe Roth. 9 out of 10 stars.

Shomer Yisroel- This sounds like a classic Isaac Honig song yet it still maintains its originality. Chaim Elie Hartman composed this gorgeous 4/4 which is full of yearning and soul. He also added his own poignant Yiddish lyrics. Once again Shua Fried did the arranging with Yoeli Dikman leading the choir. A child soloist is also featured by the name of Hershy Falkowitz and I’d be really surprised if he’s not somehow related to the singer. All of  this combined makes for a song that was a real tear-jerker for me (well not really but you get the picture…). 9.5 out of 10 stars

Chazak- This is another freilach which is also not one of my favorites but again I guess it is possible it might make it. I doubt it, though. Composed by Shloime Kalish with Shua Fried at the helm for both the musical and choral arrangements, the song also features Zevi Fried as a background vocalist. 6 out of 10 stars.

Shma Hashem- The peerless Yossi Green does it again in this rock ballad. I’ll probably never understand how he consistently manages to compose songs that sound so original and different from each other. But I can definitely understand why he chose to sell this song to Yoely. He really gives it everything he’s got which is a considerable amount. Arrangements were done by Shua Fried with the choir led by Moshe Roth. 8.5 out of 10 stars.

Tish Nigun- The arrangements are not what you’d expect by looking at the title of the song. It has a really great throbbing rock beat complete with some light piano and heavy organ. About 3:35 in, the music slows down to some kind of reggae and then finally speeds up again to a standard freilach beat. Ruvi Banet, who also arranged the choir, did a fabulous job although he did get just a little carried away at times. But hey, that can happen to anyone right? I mean, I’ve done that already in this article. Well… anyways, the song is another of Yitzy Waldner’s and it features Zevi Fried again as a backup vocalist. Although it has a catchy tune, I think only time will tell if it becomes popular, so for now I will give it 7.5 out of 10 stars.

Moidim- As anyone who’s read my previous review will know, I’m not a huge fan of chazzanus. That’s why I was pretty disappointed when I started listening to this song. But about 53 seconds in I heard a little downwards blues scale on the piano which at least for me, was an indicator that the song wasn’t really a slow one.  It develops into a funky disco which has a tune that I’m honestly not so fond of. However, I realize that others may think differently so I will rate it 6.5 out of 10 stars. The composition of the song, the arrangements and the choir were all done by Eli Laufer.

In conclusion, this album has some solid songs with great arrangements and most importantly, impressive vocals. While I’m not yet ready to put Yoely in the Jewish superstar category, I will say that he has released a very viable debut album and I think we’ll hear more from him in the future. As such I’m rating it 7 .5 out of 10 stars which means that you should definitely go out and buy the CD. I hope you found this review informative. If you have any questions or comments, please feel free to submit them below.