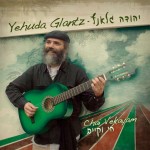 Yehuda Glantz is the working definition of the word “eclectic” in the Jewish music world. The talented Argentinean-Israeli is a multi-instrumentalist (charango, accordion, pan pipes, guitar, keyboards, percussion, vocals), and is at home playing many different genres. He always has something for the discerning ear, and his newest offering, Chai Vekayam, is no different.

It’s been a long while since his last album, and in the six or so years in the interim, Yehuda’s always good voice has sweetened. It’s not as sharp as it was. The artists he plays with (I don’t have the liner notes, so I don’t know who they are) are skilled and sensitive musicians. As always, his production quality is high, and the songlist varied. This album really has three genres running through it – Latin (of course), jazz and trance – but Glantz has never been one to stick to typical.

Yesh Li: (****) You want eclectic? Let’s start with this – a Latin based tune that includes vocal brass mimicry, klezmer clarinet, falsetto humming and a rap section. So yeah, it’s all over the place – but in the best of ways. Good lyrics – reflecting the work of Dr. Viktor Frankl, you know, meaning and all that – along with the strong beat make this a nice opener.

Bircat Habait: (*****) What a beautiful tune! And an impossibly dreamy guitar working its magic! Glantz is the third to my knowledge (behind Aish 2 and Miami) to use this poetic prayer in a song, and this is my favorite by far. While he squeezes the words into the tune a bit much, the beauty of the instrumentation is other-worldly. This song pleads for a surround sound system and a leather couch. Yehuda uses echo on the vocals to great effect as well. Just gorgeous.

Chai Vekayam: (****) In this trance-track, Glantz goes back to one of his older shtick by inserting a cantoral piece (Seu Shearim, from Rak Litzok). I’m no chazzanus maven, so I may be wrong, but that sounds like Yossele Rosenblatt in there. While slightly cooky, the sound is much more full than his earlier trance piece, Dance Tantz, on his album Rak Litzok El Hashem. Rockin’ guitar from Dani Maman gives it more power and art. Watch his funky music video of this song here: http://www.youtube.com/watch?v=clo9uv0WvQg

Jerusalem My Life: (***) Another Latin piece, with the charango running the show. The simple lyrics are in English (a first for Glantz) and Spanish. The problem here is that the first stanza repeats way too often, with the song not really culminating into anything. Some instrumental solos would have brought it out of the malaise – and I’ll take it they attempted that with some nasal Middle-Eastern wordless humming, but it could have been better than it is.

Shabbat Shalom: (*) Skip. This accordion/clarinet-led old-school klezmer song does nothing for me. I never was a fan of Yiddish Theater. The only plus is the percussion, which is awesome throughout the album.

Samachti: (***) Most of this song is about Glantz’s patented vocal overdubs, which pull out some harmonies that remind me of the Beach Boys. Another South American jumper.

Tziganes: (*****) Ole! An awesome instrumental piece featuring what sounds like a classic klezmer dance melody. The accordion rushes headlong into the violin and heavy percussion for a klezmer dance track. Heavy guitar riffs give it serious bounce, and I know lots of DJs that are going to fire this one up come the next Bar Mitzvah they play at. Reminds me a bit of Raya Mehemna’s Mehemnuta.

Lev Tahor: (**) Decent tune, but Glantz already used these lyrics on Naale, and the melodies are too similar in many respects to each other. Here, however, he adds some Spanish lyrics, so maybe that’s what I’m missing, as I don’t speak Spanish.

Azamra: (*****) A cool jazz piece with nice Hebrew lyrics. This totally chill piece has, again, beautiful instrumentation and excellent vocals. Yehuda pronounces the R of Azamra heavily, and it contrasts in an interesting way against the Israeli R of the first soloist. The bridge at 2:37 is outstanding violin work that sounds like it came from a classical work, and it segues beautifully into a subtle guitar wail. Some great tenor sax work rounds it out. Way classy.

Yocheved: (***) Some more jazz with Latin percussion work on this instrumental. It’s pretty, but the tune doesn’t have that much in terms of spiritual depth. It just is. Some nice violin solos give it what to listen to, though.

Gam Ki Eilech: (***) Yehuda starts this pretty melody in a high-pitched vocal style, but thankfully moves on to the chest, belting out the words with emotion. Listen carefully for the guitar in the background, which throughout the song is colorful and sweet. Glantz shows his own skill with some smooth accordion work.

Pat Bemelech: (***) Pass the chips – we’ve got salsa, baby! All around fun on this authentic piece right out of the Argentine – well, with Hebrew lyrics, at least.

Jazz Mataktak: (***) And we’re back to smooth jazz for another instrumental. I totally don’t go for the nasal humming in the middle (3:06), but there’s a beautiful sax to listen to here. He’s dexterous and moving at the same time, and it sounds great with the bass and piano. Talented musicians.

The album gets better as you listen to it, as there is so much good musicianship throughout that you can find something new and delectable. Percussion and guitar lovers in particular will love listening to this funky album. An awesome new album, and hopefully we’ll get to hear more, and more often, from the talented Yehuda Glantz!