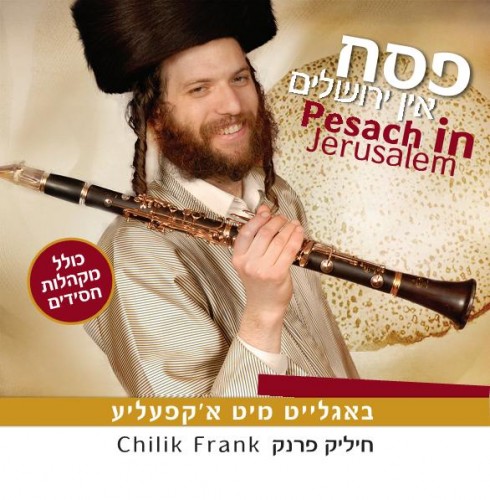 It’s time to revolutionize the next Seder: regenerate with more original songs of the Haggadah, beyond the familiar songs from the kindergarten. Thirty days before the Passover holiday and prepare for it certainly can be applied also to ‘cooking’ holiday tunes. Hilik renowned clarinetist Frank took the matter seriously. Passover preparations began for him this year already after Sukkot. After six months of hard work and strenuous is out of the studio album that will be carrying your holiday: Passover in Jerusalem, a new album in a series of holiday tunes.

Many wondered how most of the songs themselves Seder are familiar to older songs they had learned in kindergarten. Yechiel Frank discovered the reason; Passover is a holiday family. Even the courts of Hasidic editors tables on weekends and holidays in public, the order they used to do only with the family. So formed traditions of music unique to each community and rarely playing for Passover last Hasidic one another. When Yechiel began the work of the collection he had to work hard. But it was worth : foraging are complex found a treasure; Different melodic rhythm of the rest of the times, and materials magic just go out to the public domain. Away Songs Seder includes familiar and favorite, entered the album also melodies associated with each air month of spring, melodies seventh day of Passover, Songs Song of Songs – and even things related to the days of the Omer.

The success of his composition the heart and the spring does not need to talk. Also two previous album series Purim and Sukkot, a huge success when they first album also reached gold status. Little surprise waiting for purchasers of the album: When you open it, find that the disk sits on a silver bowl-like order. Like its predecessors, the album comes out in two versions: an album with Hasidic choir and an instrumental album Speechless.

Instead of grumbling about slavery, begin to dance with the broom, lifting with Hilik until next Passover and you’ll discover that the house was already clean.