Chasidic Comedian, Looking to Shed New Light in the World of Music and Entertainment CD’s 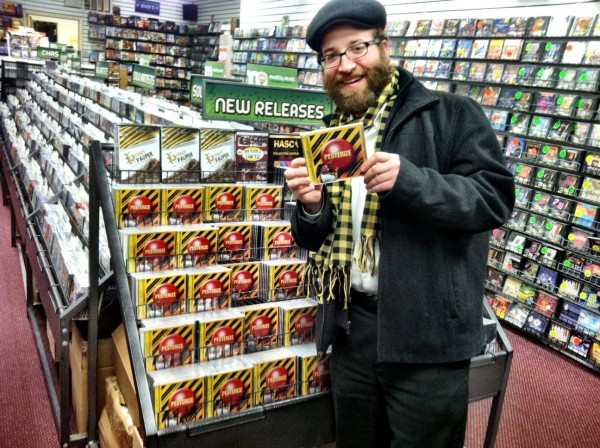 Marketing has always played a critical role in sales. As such, companies are constantly scrambling to come up with innovative ideas on how to push their products further as they constantlyseek better and more effective marketing tools. Today, it’s not just the companies that seek to market products. It is also the individuals whose products are being marketed who realize that in many ways, the keys to the success of a given product often rest soundly with how far the individual is willing to invest inthe self-marketing of his product. The results of self-marketing are bigger and better marketing venues as people use their own ingenuity and apply their own creativity towards applying new marketing tools.

“Anyone who creates the technology to stop the copying of CD’s,” says singer Beri Weber, “will make a lot of money. But for now, maybe what we need is more education on what genavia is, something I would be glad to help sponsor to help bring it the forefront.”

“Everyone in the industry seems to be trying something else,”Beri Weber continues, “such as adding incentives like bumper stickers and other giveaways into their CD’s. But when you think of how just the cost of the CD alone is prohibitive, adding incentives to the CD just ends up costing you more. So I haven’t done it.”

But one person has gone ahead and attempted to do something. This something is an ingenious idea recently created by thePester Rebbe – Yoely Lebovitz whose new CD –Pesterized was released, and has since seen record breaking sales already topping last year’s record for a Yiddish comedy album  with  his CD Boondash.  The CD includes one entry into the Lobovitz’singenious marketing technique: the Pesterization Game.

The Pesterization Game’s ingenuity lies in the double service playing the game can provide. Not only is the consumer happy with being able to enter into the raffle entry each CD’s unique code entitles the bearer to, but it also gives the consumer a direct voice thatYoely Lebovits wants to make sure is heard.

“In a comedy CD, as opposed to music, it is so much harder for the performer to get a sense of what the audience wants,” Yoely says. “Given how some people are more sensitive and others appreciate different styles of humor, the Pesterization Game lets me know exactly what my listeners like to hear.”

With the Pesterization Game, the buyer enters his unique code online onwww.badchen.com . He then fills in his name, the store he bought the CD, and his feedback. He can fill in his favorite track, whether he would like to see more music videos or more dialogue. He can offer suggestions of what he might like to see in a future CD, what songs, what episodes. After entering this information, not only is the consumer given a voice but as an added incentive, he will be entered into a raffle to win $400 -at the shop that he purchased the CD in – during a drawing which will take placeMarch 25, (though the winner needs to be sure to keep his original album cover to confirm the matching code.)

Even the stores come out ahead, since the store which has sold the most CD’s according to the online entries, will be announced to the  Pester Rebbe’s email following on a list that reaches more than twelve thousand addresses.

“If I can do something like this on my small scale,” says Yoely, “Just imagine what the big music performers like can do with an idea like this. It’s the best kind of payback, benefiting the fans and benefiting the performer as well. From my perspective, if my fans communicate what they like and what they want to see more of, it makes me smarter to see what people embrace and is well worth the $400 raffle prize.”

“Aside from the monetary value an artist can secure, the benefit of involving the fans in “the decision” of which material to use, is priceless!” Says comedian Hilly Hill – who has many years experience in marketing, – “it cultivates the fan to a loyal fan! And the loyal fan will protect the interest of the artist.”

“I think it’s a great idea,” says Beri Weber, “a great idea, but not necessarily a solution. I still feel it is a lost battle until you can talk to everyone and show them. I can’t say that I understood myself before I got involved in the business, before I truly understood how hard it was to get out a CD, how it takes years of work, how it rips out your heart to know that one out of ten copies out there of your CD have been copied.”

But the feedback for Pesterized and the Pesterization game has so far been amazing.

“The truth is,” says a satisfied fan, “I would buy another Yoely Lebovitz CD anyway, but having the raffle prize is a nice addedbonus.”

The comedian, Mendy Pellin on his twitter handle @MendyTV jokingly tweets, ” I always knew you could sing, I never knew you were funny.”

And so this innovative marketing tool has made its debut at the same time as fans all over get Pesterized. The question remains though how successful will Yoely Leobivtz’s new marketing endeavor be – the answer will have to depend on the fans, a part of the market that until now never received the voice and attention that the Pesterization Code opportunity is offering as of today. So will the fans choose to reamin in the dark or will theytake advantage when “Opportunity Knocks”. My suggestion:Tzind ooon de light!