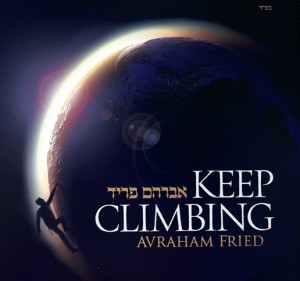 SPLASHNEWS- The album that we have all been waiting for has finally arrived. It’s not often that two super stars release their albums at the same time, but it just happened. This album was years in the making as is quite evident from the quality of the album. Featuring 13 songs in all different styles, this CD has something for everyone. Everyone knows that Fried’s voice is unreal but what really hit me in this album is his ability to adjust his voice to the specific style and emotions of each song. That to me is what makes this album a masterpiece. Produced by Avraham himself, this album arrived with a bang and is here to stay. Here is what I think of the songs. Many songs were arranged by Yuval Stupel; I will note if not.

1-Hofachta-Composed by Fried together with Yitzy Waldner, this song will be an instant hit and if you are looking for “that” song, this might just be it. Exciting intro, but not too much, leads into a fast paced thumping song. Interestingly, there is an Irish interlude at 2:52. I would have liked to hear more of the high-harmony that he does on the high part a couple times but even without that, this song did it for me. 5 out of 5 stars

2-Yehalelu-This song, also by Waldner & Fried, is a waltz and pleasant to listen to. I just can’t figure out when this song can be sung. Maybe as a dinner song? I will leave this song unrated as I don’t really understand waltz’s, but you could tell me what you think.

3-Vezakeini-Composed by Yossi Green, I know many of you will say how can he dare put out another Vezakeini?! When I first saw it, I thought it would be a fast song because it is right after a slow song, but he went two in a row. Sounds nothing like the song by Baruch Levine and I guess that’s a good thing. For those Kallah’s that insist on walking down to Vezakeini, now you have two options. Arranged by Moshe Laufer. 3 1/2 out of 5 stars

4-Ein Kelokeinu-This is a fast Yeshivishe style song that could have been the opening track. It is also a three part song with the main high as the more intense part but switches to the less upbeat third part. This creates a well rounded song that doesn’t get boring. Great chasunah potential. Composed by Meshulam Greenberger. 4 out of 5 stars

5-Retzoneinu-Guess who composed this one? Yes, Yitzy Waldner. For those that miss the Fried songs of old, this one is for you. Starts off in the chazzanus style that Fried loves and he really displays his voice nicely at 1:49. It also features a kids choir that does a great job and at 3:57 the mens choir harmonizes over them which creates a gorgeous affect. This song is stunning and you may have to listen to it a couple times to learn it but it is worth it.With a group that knows what they are doing, this can be the kumsitz song that will take over. Personally, this is my favorite song and when I listen to the melody while thinking about the words, I get the chills from it.Arranged by Moshe Laufer, featuring Shraga Gold’s Shira Choir. 5 out of 5 stars

6-Kach Es Sheli– Starts off with heavy guitar riffs and the music gives the first low a sense of urgency. This song is not an original song, but that’s okay in my books as long as it’s not well known. The song also features great contrast between the low and the high parts. Exciting bridge at 3:28.Composed and arranged by Yuval Stupel, originally recorded by Yisrael Parnes. 3 out of 5 stars

7-Keep Climbing-The title track is a typical Avraham Fried english song composed by himself. It features a good message and great arrangements by Avremi G. The highlights for me were at 3:47 while singing the word climb, he literally climbs with his voice to heights rarely heard on this album. Also towards the end of the song on the words, “where you want to go” there is really good falsetto harmony. I don’t like how he transitions from low to high, but that is obviously how he wanted it. 4 1/2 out of 5 stars

8- Amein– Also starts with heavy electric guitar. This song, composed by Mendy Gerufi, is a typical Yeshivishe song and features a very interesting musical interlude at 2:29 that I don;t even know how to explain, so I won’t! This song can go both ways, either it will become popular, or we will never hear it again. 2 1/2 out of 5 stars

9-Lomoh Hashem– Starts with acoustic guitar, percussion, and possibly harmonica but I doubt it. In general this is a very pleasant song to listen to and I particularly like the non-typical arrangements. One part that I listened to a couple times is at 4:04 where his voice fades out and almost breaks but I think it’s to contrast with the transposition. I’m not sure if I agree with choice of lyrics, asking why from Hashem but as is evident from the album jacket, he also wasn’t sure about it but apparently he decided to go through with it. Composed by Fried and arranged by Ruli Ezrachi. 4 out of 5 stars

10- Sharei Mizrach-A horah that is sure to become a hit. Expect to hear it at  the next chasunah that you attend. As he writes in the jacket, “what’s an album without a good horah?” It sounds almost like a dig a Shwekey’s new album that doesn’t have even one horah, but of course it’s not! It is ironic though.Composed by Elimelech Blumstein and arranged by Ruli Ezrachi, also featuring the Shira Choir. 4 out of 5 stars

11-Elokai– This song features an all acoustic intro and is the second song with the nostalgic Fried feel. One highlight is at 3:06 where the choir sings the high part and gives a slightly Chassidishe feel to it. Very nice, solid song.Composed and arranged by Moshe Laufer. 3 1/2 out of 5 stars

12-Light– Both the intro and the low part have a sudden start which I like because it is something I am not used to and I always like something new. The song also features a very interesting bridge at 2:35. From the lyrics to the music, this is something you have never heard before. It is worth listening to this just for the arrangements, although it doesn’t take a genius to realize that they are not your regular.Great job by Yitzy Waldner, with Ilya Lishinsky on the arrangements. 4 out 5 stars

13-Heimoh Heimoh– This is a Lipa Schmelzer classic and has been out there for a little while but will now become super popular with it being featured on this album. When I first heard the intro, all I was able to say was, “what?!” Then I had to listen to it again before listening to the rest of the song. You will probably do the same. In the beginning the song doesn’t sound so exciting but at 2:35 it really picks up the pace and can get you up and dancing. Make sure you are not driving. The song seemingly ends at 3:35 but then takes a 360 degree turn and then spins around again at 3:52 for the ending. Not for the faint of heart. Please keep all hands and feet in until the ride comes to a complete stop. Respect for Naftuly Moshe Schnitzler who arranged this masterpiece but there is no way that Lipa was not involved! This should become an instant hit which means… 5 out of 5 stars

Congrats to those who made it to end of the review. All in all, this album, while it does not feature any major breakthroughs, is an excellent album from top to bottom.  It has three songs that I rated 5 star and I do not do that often. Even the weaker songs are great songs and a lot of time was obviously spent on this album. Overall, I rate this album 5 out of 5 starswhich means be careful not to spill your drink in your rush to get out.