[audio:http://jewishmusicreport.com/wp-content/uploads/2012/02/michoel-Shtreicher-MP3.mp3]
Here is the ULTIMATE Michoel Streicher collection!! Over the last twenty seven years, Streicher has released a staggering 25 albums a total of 289 songs, and ALL are encompassed in this timely classic Double mp3 CD. Hit songs like Koach Hatorah and Don’t Give Up are included. Streicher was famous for his good range and powerful voice and was one of the typical JM’s-early-90′s success stories. R’ Michoel had the Zchus and continues to be mesameach thousands of Jews around the world. He was the baal tfilah and cantor in Manhattan, at the Biyalestov West Side Jewish Center, Bais Naftoli of California and Bais Chabad of Toronto Canada and more. His entire life he did his best efforts to sing in a way to bring back Jews to our father in heaven, he visited and performed for those in correctional facilities and hospitals to bring joy into broken hearts. Michoel also attended wedding of poor families to make them happy. Also featured on the album are Michoel’s children, Duvi, Yisroel, Eli and Baruch 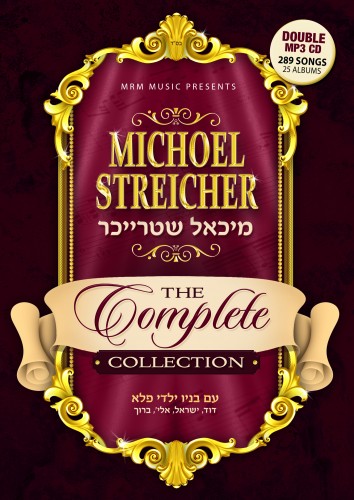