Spotlight on: Dance With Shloime Daskal 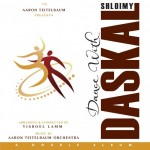 While like everyone else I am always on the lookout for top notch, new music, I have long been a firm believer that lurking within our own music collections there is a goldmine of good music just waiting to be rediscovered.  You know what I mean.  Favorite albums from five, ten, even decades ago, depending on how old you are, some of which are literally chock full of musical gems. I guess that explains why while only four new albums that have come out in the past year have earned a slot in my van’s CD changer, two are wedding albums.  The first is Nagila V’Nismicha featuring Benny Friedman, released last March.  The second is the all new Dance with Shloime Daskal, released just days ago.

I should preface this by saying I am generally not a big fan of wedding albums.  I crave new songs as much as I crave freshly baked cookies.  But in the case of both of these albums, they feature a great selection of songs, sung by one of the best voices in the business, produced, performed and arranged by the best talent that Jewish music has to offer.

Dance with Daskal is fifty nine minutes of solid musical talent.  There is a reason why Daskal is possibly the most sought after singer in the wedding business – he is truly talented.   Put him together with the Aaron Teitelbaum orchestra and the endless talent of the legendary Yisroel Lamm and the result is seriously good music and an excellent example of what the music sounds like at any Teitelbaum wedding.

The bones of any good album is song selection and the beauty of doing a wedding album is that it gives you the opportunity to pick and choose the best from numerous sources.  DWD mixes Chasidic favorites from Slonim, Bobov and Stolin with selections from Israeli artists including Meydad Tasa and Mendy Jerufi. Classics like MBD’s Kulam Ahuvim and Shwekey’s Areivim share space with lesser known but intriguing songs like Yoely Greenfeld’s Akdamus Milin and Yeedle’s Mikimi, polished to perfection by Daskal.  All of today’s wedding standard including Ki Hirbeisa, Omar Rabbi Akiva and Ya’alili are here, and Daskal does an admirable job tackling not only Eighth Day but also the Israeli songs, something I wasn’t sure he could pull off.

DWD is billed as a double album, which to me isn’t exactly accurate as the second disc, titled Special Moments with Shloime Daskal, is a Daskal chupah and is just sixteen minutes long.  Curiously absent are any songs released in the last decade, as it features selections of yesteryear, going through a Daskal chupah, from top to bottom.  The tracks listed on the disc don’t exactly match up with the tracks on the album, but all the music is on there, even if it isn’t listed anywhere in the album jacket.

The home team of Daskal, Teitelbaum and Lamm are featured prominently in the credits as the album is produced by Shloime Daskal, with production by Aaron Teitelbaum and arranged and conducted by Yisroel Lamm.  Nice work by the Shira and Meshoririm choirs on both discs, though I am not a fan of choirs at a chupa which makes it feel more like a performance than like the most important moment in the lives of the chosson and kallah.

Most of the issues I had with this album weren’t music related although both discs are cut a fraction of a second too late and feature a slight glitch at the tail end of the last track.   It doesn’t cost any more to get the names of the songs right as some of the songs are titled by the part of the song being sung as opposed to their actual names.  (For example, Baruch Levine’s V’Zakeini  is referenced as U’Meirim es Haolom because that is the part of the song that was used here.) I can’t help but wonder about the spelling of Daskal’s first name which appears as Shloimy on the cover but consistently as Shloime in the booklet.

Bottom line?  Dance With Daskal is great music, done right and a refreshing example of what Jewish music should sound like.  You can find it at your local Judaica store at www.topjewishmusic.com.