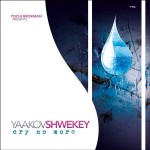 Usually we hear about a superstar releasing a new album months in advance. However, Yaakov replaced the usual hype with an element of surprise combined with humility. He begins the booklet with a message that he was inspired by the passing of his dear friend, and he transformed that pain in a message to uplift others. “Cry No More” is a theme of yearning and bitachon that Hashem will lift us out of this Golus.

K’dai – Composed by Yitzy Waldner. This song begins quietly and then transitions into an upbeat song that is similar to his “‘Lesheim Shomayim” but nicer and warmer. The high part that starts with Kedai hu loi has the “dai,dai dai” like Ad bli dai from his last album so it has similarities to his old stuff, but this has more geshmak to it.

Batuach Ani – Composed by Elimelech Blumstein.This song is a hartzige slow Shwekey song with a feeling of hope. The words are from Slichos that convey the message of Tefilla and that nothing stands in the way of tears. The mood of the song is one of strength , not brokenness and despair. It’s not so emotional and that helps it put a positive tone to it.

Lo Yaavod –  Composed by Yossi Muller. This features Metallish – emphasizing guitars. It’s upbeat and again shows strength of Avoidas Hashem with love , not for reward. It’s not in a condescending fashion, but a powerful message that it within your reach – “You can do it!”

Mi Bon Siach – Composed by Yitzy Waldner. It’s a nice Chupa Song and “shoishan choichim” sounds like it comes from the Mama Rochel Song – ” She raised her eyes to the Heavens”.

Oleinu – A slow song that’s composed by Ezi Reissman. The style is similar to “Vihee Sheomdo”  especially by the beginning of the high part “Sheloi Osonu”. It is hartzig and contains classic Shwekey high tones that are so soothing. The adult choir finishes the song that transitions into accapella.

Rabi Nehoiroi – An upbeat geshmake song composed by Yitzy Waldner and Elie Schwab that celebrates teaching Torah to ones children as the only occupation as quoted in Gemora Kiddushin.

Yesimcha – Composed by Yitzchok Rosenthal. The song starts off like a pleasant lullaby when one puts his kids to sleep as that is the theme of the song which is bentching your children. It’s arranged by Yisroel Lamm and features the Shira Chadasha Boys Choir and Yaakov’s son Menachem. What a bright future he has!

Retzoineini – I love it when Yeshivishe singers stick in a Chassidishe nigun. Yaakov has done it before with Yiree and  Emes. Even Miami Boys Choir has Hashkiveini in Revach. This song is composed by Pinky Weber and starts offf with the Mezamrim choir. So when you hear it be ready and don’t think there’s some mistake that by accident Yoichy Briskman stuck in Sruly Werdyger by mistake…The song is very geshmak. The only thing I may have done different was to put in more power in the words “retzoineini lirois es malkeini” but at least it does by the song’s ending.

Cry No More – Composed by Yaakov and Yitzy Waldner. This is the climax and inspiration of this album. A powerful tefilla to Hashem to stop the suffering and crying. We started off with the absence of hype replaced by humility. How does humility go together with strength? Because humility doesn’t mean ” I can’t”, but rather that everything is Hashem’s koiach and he can do anything including bringing an end to the pain , terror and Golus.

This is one of my favourite Shwekey albums. Some of them have slow songs that are somewhat melancholy that makes it difficult to listen to when one is feeling a little down. However, Cry No More has a very serious theme inspired by tragedy, but all the songs are uplifting and positive.