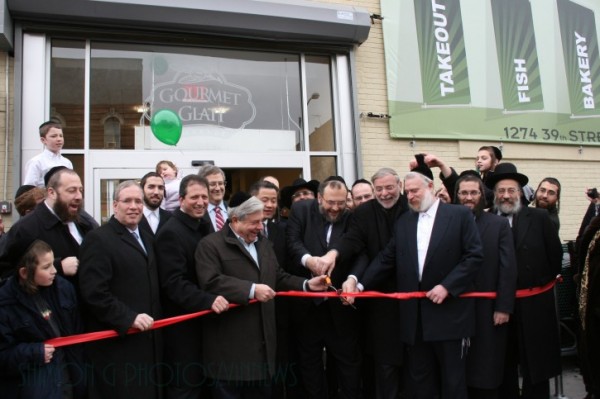 Borough Park, NY – Over seven thousand people thronged to Borough Park yesterday for the grand opening celebration of a store that not only hopes to provide a pleasant and affordable shopping experience but has also created over one hundred jobs within the community.

Gourmet Glatt, located at the former location of Friedman’s Supermarket at the corner of 13th Avenue and 39th Street, is actually housed in a landmark building which has been a market since the 1930’s.  The facility has been undergoing renovation since March 2011 and the opening of the new megastore has created one hundred and twenty five jobs, providing employment for more than sixty members of Brooklyn’s chareidi community.

The 20,000 square foot store will provide one stop shopping including grocery, meat and poultry, deli, sushi, fresh fish, bakery, appetizing and an extensive selection of produce with valet parking to accommodate up to seventy eight cars.  Both valet parking and home delivery will be provided free to Gourmet Glatt customers.  The facility is a sister store to the 35,000 square foot Gourmet Glatt located in Cedarhurst.

“This wasn’t just a supermarket opening,” Hikind told VIN News.  “This was all about investing in our community and the ripple effect, both the jobs created and other good things that will come from this made it a delight to be there.”

Gourmet Glatt continues to celebrate its grand opening with a week’s worth of events including cake decorating and challah baking demonstrations on Monday, a cooking demonstration and cookbook signing on Tuesday, a fruit carving demonstration on Wednesday, a men’s night out featuring a kumzitz, complete with cholent, kugel and wine on Thursday and fresh flower bouquets to all customers with a minimum fifty dollar purchase on Friday.