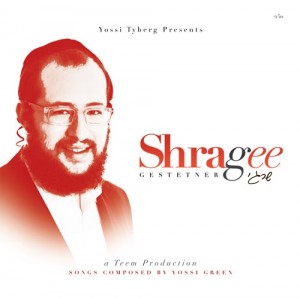 Much has been said about the recent explosion of Chassidic singers and performers, so for me to pile on is unnecessary. Since Shragee Gestetner’s new album has come out, I have listened to it extensively to really get to know the songs and to try and formulate an opinion based on a longer amount of time than I usually would before writing a review. As a whole, I think this album is a very enjoyable album and worth buying. When it comes to songs that will become popular on the wedding scene, I think it is not a fair barometer anymore to judge a new release. I am not sure why there have not been many new songs from recent albums being played at weddings (and maybe that can be a post at a later date), but the fact that there are not that many songs in the last year and a half that have come out and become big, means that we can’t judge an album by how many songs will become popular.  There are many more albums coming out today and every performer has to try to do something special or different so that people will want to buy their album. Shragee has a very sweet voice, a nice range, and he also composed some of the songs on the album, so we know he has a lot of talent to bring to the table. The album is produced by A Teem Production, Yossi Tyberg and Gershy Moskowitz, and many of the songs are composed by Yossi Green. The musical arrangements are by Shua Fried, Ilya Lishinsky, Yuval Stupel, and Mendy Hershkowitz, and while I will comment on some of the arrangements that I feel were a little underwhelming, I think as a whole they are arranged tastefully.

Sim Bracha: The 1st thing that hit me about this song was the bass guitar solo to begin the song. If I might digress for a moment, this is a hot button topic by musicians (especially bass guitarists) in the Jewish music scene. If you go to a typical wedding, there is usually no bass guitarist and the bass lines are being played by the keyboardist. There are some keyboardists out there who can play a mean bass, but there is no replacement for the real thing. Aside for trombone, the bass guitar is probably the most underutilized instrument. For me it is a breath of fresh air, and very daring to begin the whole album with a bass guitar solo. It is amazing! The song as a whole, composed by Yossi Green and arranged by Ilya Lishinsky, is a pleasant Hora, and very enjoyable. Yossi Green adds to the song with his unmistakably unique background vocals. I am not sure why the song fades out at the end, but if there was no ending to be had, it is better than just an abrupt end (as I will expound on later).

Venizkeh: A surprisingly upbeat ballad that is just enough different to stick out, but a really nice song. The song is composed by Ari Haas and arranged by Shua Fried. Shragee sings the backup vocals himself on this song. I think the instrumentation and arrangements on this song are very tasteful. I especially enjoyed the guitar and saxophone solos, and the ending as well.

Maleh Mishalos Libi: Two slow songs one after another is not something you’ll usually find on an album, but in my book, it’s ok. This song is composed by Shragee himself, and arranged by Shua Fried. It has more of a haunting and somber feel to it. The very simple instrumentation the first time around the song is very tasteful, and I like how it progresses and builds up during the song. Shragee’s backup vocals are also very powerful in this song as well.

L’chaim: Yossi Green! Need I say more? This song is a prototypical Yossi Green song. It is an enjoyable song to listen to right up until the abrupt end. It just ends. (kinda like my assessment of the song just ended…)

Kerachem Av: This is another Yossi Green composition. The musical arrangements are by Shua Fried. This is a very nice slow and hartzige song .This is a song that really highlights Shragee’s sweet voice and range.

Dayoy: This is a very solid Hora that might be the best song on the album. It is composed by R’ Moshe Peretz Schwartz and arranged by Shua Fried. The choir is led by Moshe Kraus. There is a little techno/synthesized music that is not my favorite, but the song is so good that I can overlook it. This song also ends abruptly.

K’sheim: A real nice and catchy song. The song is composed by Shragee, the intro is composed by Pinny Ostreicher, and arranged by Ilya Lishinsky. This is a very upbeat song and is one of my favorites on the album.

Odeh Hashem: This is another Yossi Green and Shua Fried collaboration. It is a very sweet and emotional song with words (giving thanks to Hashem) that really fit the song. This song also fades out at the end.

Bnei Beischa: A very lebedik and geshmake song composed by Pinky Weber and arranged by Yuval Stupel.  There is a lot of brass in the song ala Moshe Laufer, but since I love brass, it works for me. The choir by Moshe Kraus really adds to the song as well.  I really enjoyed listening to it.

Uvruchim Heim: A beautiful and hartzige song composed by Shragee himself. The song is arranged by Shua Fried. The highlight of the song for me is the children’s choir, led by Moshe Kraus.

Moshe V’dovid: The final song on the album is a Yossi Green composition that came out a few months ago as a video in tribute to a bar mitzvah boy. It is arranged by Mendy Hershkowitz of Freilich Orchestra. I liked the song when it came out, and like even better with Shragee singing the whole song himself, with of course Yossi Green’s background vocals.

In conclusion, I feel that this album is a very solid album and an enjoyable listen. I highly recommend it. You can purchase it at http://www.topjewishmusic.com/index.php?main_page=product_info&products_id=236, http://www.mostlymusic.com/shragee.html, or anywhere good Jewish Music is sold.