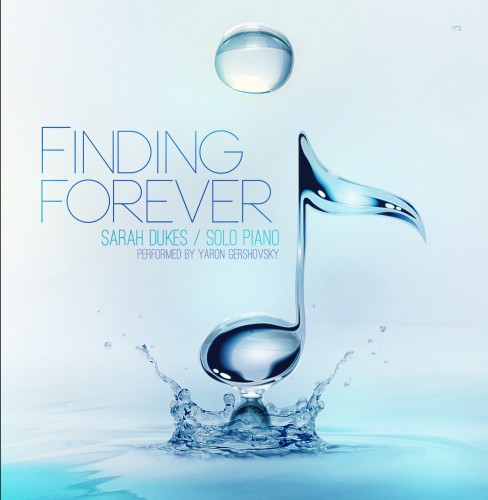 [Download Sampler Here]
When pianist Sarah Dukes sent her original piano-solo compositions to renowned composer Yaron Gershovsky, she was hoping the famed musician would accept her request and lend his technical mastery towards her debut album. Her songs were ready for the world, but her perfectionism wouldn’t let her rest. She needed Gershovsky’s hands.
When the peerless composer received Sarah’s songs and gave a listen,  he knew he had just discovered a tremendous talent. “I saw right away that her songs came straight from her heart,” recalls Yaron Gershovsky, “She really was feeling all her music, and that touched me.”  Impressed with her songwriting skills and affected by the emotion she infused with each song, Gershovksy felt he had to accept the challenge of channeling her music. That same day, as Sarah’s piano solos filled his office and awakened his senses, he responded to her e-mail: “I love the emotion that comes through when you play yours songs. I like this…a lot!”From there began a musical relationship that cemented Dukes’ stirring collection of songs on her debut album, “Finding Forever.”

Having taken up piano lessons at the young age of six, Dukes composed her first song — a playfully dramatic number called “Elephant in Tights” — at the mere age of eight years old.   Classically trained until she was 18, the North Carolina raised pianist increasingly turned to music and songwriting as a way of expressing herself and by the time she finished high school in Pittsburgh, PA, she had an impressive collection of original pieces.

Unlike most classical musicians who are glued to the rules of composition, Sarah found that the only way she could write music that resembled her truest self was to consider her emotions first and structure second. And as her music matured, she became confident with her unique way of composing.

“I just go to the piano and play whatever comes out,” Sarah explains. “It is not analyzed or restricted by anything. It is a complete representation of raw emotion.”

Gershovksy, though a genius in technical mastery and compositional structure, is quick to mention how Sarah’s genuine way of songwriting affects her music positively.

“Her music is a part of her body and her soul,” he says. “She is an accomplished piano player, able to play and transmit her emotions flawlessly.”

Of course, Sarah’s insistence on translating those exact emotions made for interesting and often demanding recording sessions.  Sarah would send Gershovsky her music, telling him exactly how she wanted it to be played. The song was then recorded over and over until Sarah felt like it was her own.  “It was very important that I felt like it was my emotion and my interpretation,” she explains.

Of course, this didn’t intimidate the great Gershovsky. “I saw it as a challenge to try and channel her music for her, and play it in a way that would make her feel like she was playing it herself.”

This is where Sarah feels gifted to have won Yaron’s confidence: “He was determined, and he truly became my fingers.”

To that praise, Yaron blushes. “It makes me very proud to hear that,” he responds humbly. “It’s a huge compliment, considering how much Sarah’s music means to her.”

“I learned a lot from Sarah,” he adds. “She is so amazingly sensitive to any nuance I put into her music.”

At the same time, Sarah’s humbly rejects requests to explain the story and meaning behind her songs. “Everyone interprets the songs differently, they hear what it means to them and I wouldn’t want to get in the way of that,” she explains.

That being said, one thing every listener will hear is an unparalleled sound that is unmistakably from Sarah’s heart. All 14 songs on “Finding Forever” are melodic and soothing piano solos, sometimes introspective — like the deep-keyed “Troubled Thoughts” and “Up Toward Heaven” — and often hopeful and uplifting, like “Tomorrow’s Dream” and “Star Catcher.” Every note rings with a stunning sincerity and is bursting with an energy that will capture the attention of an array of listeners. With emotions wonderfully open to translation, “Finding Forever” demands repeat listens and will become the soundtrack to many hearts looking to embark on an honest and rousing musical journey.

“Finding Forever” can be found in many Judaica stores nationwide, or online at www.mostlymusic.com/finding-forever. Learn more about Sarah and stay updated on new music by visiting www.SarahDukesMusic.com.