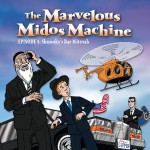 Well,well, well, Marvelous Midos Machine #3  told a story about a time machine going back in time and contrasting 1968 to 1988. Well it took 23 years, but Volume 4 has arrived in 2011. However, we are transported back to 1988 because the story picks up just where it left off. Shnooky(Abie Rotenberg) is about to become Bar Mitzva and comes with his brother Shloompie (Moish Blaustein)and Dizzy (Shloimie Goldreich) to Dr. Midos (Rabbi Shmuel Klein) to invite him to shul for the first time he puts on his tefillin and show him his Tefillin, when they realize in horror that they switched bags with a Chinese man and instead of Tefillin they have fortune cookies!!! The story is full of suspense as they try to hunt down the tefillin. Along the way they are involved in saving the U.S. president after he was kidnapped, and he ends up finding Shnooky’s tefillin and giving it back to him.

Now this story is sort of a time machine because it talks about President Reagan, not Obama. Also, TWA – which is not around anymore and Polaroid cameras.However, the kids of 1988 are introduced to the “Middos-pod” an invention of the new millenium. It also mentions other new things like sushi.

The booklet starts with a lovely tribute by the producer Abie Rotenberg to the late Moshe Yess a”h with a picture of him. Moshe was the voice of Dr. Doomshtein and sang “I’m a Hippopotamus” and was “a creative partner in the birth of the MMM.” which was born winter of ’86 when they both lived in Toronto with little kids and decided to do an entertaining yet educational album for kids.

The first midda is patience. Anybody with kids knows this situation! I love how Abie sings the word “paaatiiiieeeennce” to slow down and not feel that you must have it now. That tune keeps playing in my head.

The next one is chesed. We are treated to the sweet voice of Baruch Levine singing a hartzige song by Rabbi Shmuel Klein. The words describe how one should put himself in somebody else’s shoes and how important it is – oilom chesed yibone and that one becomes like Hashem when he does chesed – hadbeik bimidoisov. It’s a really beautiful song – especially by the harmony with a  child soloist.

Dizzy comes thru with his cute quips like calling Shloompie “shloompers” and Shnooky “Shnookels”and his youthful enthusiasm describing the kiddush in shul.

The next midda is “Mevater”. It is explained beautifully by Dr. Middos. They could have gone the easy route and teach a lesson about being selfish, but instead they took the story and song to another level and shows how even if someone has the full right, it is a great thing to give away of himself for somebody else.

Finally, the last midda is hislahavus – enthusiasm. Another thing that wasn’t around in 1988 – the town Ramat Bet Shemesh. The MMM goes global! It’s very cute hearing kids with Israeli accents (even though I’m sure we can hear plenty American accents in Ramat Bet Shemesh). And Dr. Middos as a former English teacher can’t resist but correct Shnooky with how to pronounce “enthusiastic”. The guest singer is appropriately Shloime Simcha who sings with a bren. The song  ignites a spark in the neshoma  and to look at Mitzvos as gifts to to want to serve Hashem with a geshmak as it says “Vichai Bohem”.

Then a surprise guest – Uncle Moishy and it’s Dr. Middos who convinces him in 1988 to come out with videos. It’s also nostalgic as Uncle Moishy talks about vising Country Yossi to go over the latest Kivi and Tuki tapes.

Then Dr. Middos finds a “cassette” from Shnooky that he wrote a song about being a “Bar Mitzva” . It is actually composed by Shnooky (Abie Rotenberg). It is sung beautifully by Tzvi Felder. It describes all the ingredients of a Bar Mitzva – not just turning 13, but among other things – that Hashem loves us and we should not let him down.

At the end we have a special appearance by Ronald Reagan… just in time for the Republican primaries! Which candidate represents his values? It arouses emotions about how we miss him and are lacking a leader of his caliber since he left office. At the end Reagan calls Shnooky “Master Shnooky” . The title “Master” is used for a boy instead of “Mister”. I am pointing this out because in all the years living here in New York I never heard that and it is probably more used in Canada than in the U.S. and many listeners wouldn’t understand that title.

So I would like to congratulate my friend Rabbi Shmuel Klein on his performance with another great album! Keep up the great work!