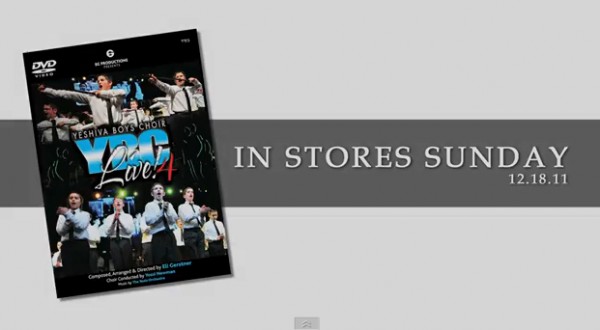 Eli Gerstner and EG Productions bring you the future of Jewish DVD’s presenting YBC Live! 4. This fourth installment of the YBC Live series is a little different than the rest. It will star YBC (conducted by Yossi Newman) as you have never seen them before. The DVD will be divided into 2 parts, half consisting of live performances from 3 shows in NY this past Succos and half ALL NEW MUSIC VIDEOS. Of course there will also be a BRAND NEW YBC song called “Baruch Haboh”, written special for this project, as well as extras like bloopers and behind the scenes. It will also include 2 versions of the ever so popular “Ah Ah Ah”, the dance version & the live version. It will be available both on DVD & CD at any of your local Judaica stores and online at www.theyeshivaboyschoir.com