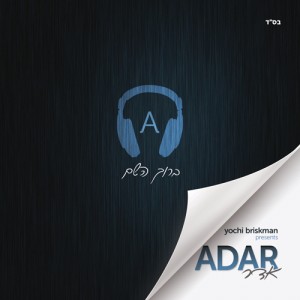 My first reaction listening to this album is where have they found this special talent? I have never seen any videos of him singing at weddings, like I have of most of the newest singing sensations. I have never heard of him, and I am probably not alone here. Amram Adar seems to have burst onto the Jewish Music scene (well actually danced his way in with his music video release) and taken us by storm. Amram is as versatile of a vocalist as I’ve heard. He can sing Ashkenaz, Sefard, Yeshivish, Chasidish, and Chazanus, and all of these really well. His voice is polished and full, and his range is amazing as well. Amram shows us he excels in singing both fast and slow songs. I don’t know if Yochi Briskman is the one who discovered him, but he has a great track record producing albums for solid and talented performers, and Amram Adar can be added onto that list as well. The album, Baruch Hashem, is sure to become a hit album, and I am confident that some of the songs will become big hits as well.

Baruch Hashem- As the title track of the album, this song really starts off with a bang! There are 6 different languages used to begin the song; Hebrew, Spanish, English, Russian, French, and of course Yiddish. It’s a very catchy tune, composed by Yitzy Waldner. The intro sounds like a classic Moshe Mona Rosenblum piece, complete with some nice piano and brass parts and he is the arranger of the song. This song really brings out Amram’s voice and is a great song to start off the album.

V’ilu – Wow! I think that sums up my opinion of the song. We all know Yochanan Shapiro, of Acheinu fame, is an amazing composer, and therefore we expect nothing less than an amazing and hartzige song from him. Add in Yanky Briskman’s arrangements and Amram’s sweet voice, and this has a chance to be a real hit song.

Halaila – This is the song featured on the recent music video that Amram released. It is mostly techno music, arranged by techno master Ian Freitor. This is a catchy horah composed by Yitzy Waldner.

Boee Kallah – This song is another sweet and hartzige song. It is composed by famous composer Yitzy Waldner, the main composer on the album, and arranged by the legendary Moshe Laufer. I can just hear this song as a staple by Chupas and as dinner music.

Kesser/Kodosh – This is a two part song. The first part is a nice piece of chazzanus, composed and arranged by Dr. Mordechai Sobol, a legend in the world of chazzanus. Amram shows his versatility by doing an amazing job on the chazzanus. The other part of the song is composed by Yitzy Waldner, and arranged by Dr. Sobol’s son, Ofir, also a legend in the world of chazzanus. This song as a whole has more of a chazzanus feel, and as such, is not the usual style you would find on a regular Jewish music album. Nonetheless, it is a nice and enjoyable song.

Git Voch – Another Yitzy Waldner song set to the words of Havdala with added Yiddish words, hence the name Git Voch. The song is arranged by Ian Freitor. Although Ian usually is into techno programming, he also proves here is a talented arranger with regular instruments as well. This song is not one of my favorites, but is an ok song.

Ad Matai – A touching song about the long galus we are in. This is the Hebrew version of the song. The song is co-composed by Yoel D. Goldstein and Yitzy Waldner, arranged by Yonatan Razel, and features child soloist Moshe Green.  The Hebrew lyrics are written by Srulik Adler. This is the type of song that I expect to see eventually on Youtube with a touching video attached.

Moshiach – This is a catchy and upbeat song, which I find to be the perfect ending to the previous song. The meaning of the words is that we should be zoche to greet Moshiach! This song is composed by Yoni Eliav, and arranged by Moshe Laufer & Yanky Briskman.

Brich – Another sweet and hartzige song, this one co-composed by Amram Adar & Yitzy Waldner, and arranged by Moshe Laufer. From all the slow songs on the album, this is the weakest, which just speaks to how solid and amazing this album is! Brich also features child soloist Moshe Green.

Yismach – This song stats off in more of a sefardi style hora eventually switching to a disco beat. It’s a nice solid song that might also find its way onto the dance floor. Yismach is composed by Yitzy Waldner, and arranged by Moshe Mona Rosenblum.

Ad Mosai – This is a Yiddish version of Ad Matai, with the Yiddish lyrics written by famous badchan Motty Ilowitz.

In conclusion, this seems to be an amazing debut album by a real exciting performer. To buy baruch Hashem visit http://www.mostlymusic.com/adar-baruch-hashem.html or wherever quality Jewish music is sold.