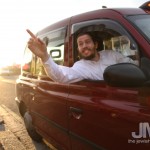 Fresh off the heels of their exciting Succos release, Big Voices, Ami Magazine will be releasing another exciting musical project, this one the highly anticipated Copyright music video, which will be a light hearted look at the very serious problem of illegal musical copying that has been plaguing both the Jewish and secular music industries.

FM Productions of London told Jewish Music Report in an exclusive interview that after weeks of work, from recording vocals, to filming on site in London, to getting all nuances of the music exactly right, Copyright is expected to be released as a special bonus insert for Ami Magazine subscribers in the Shabbos Chanukah edition and will feature the voices of Shloime Gertner, Dovid Gabay, Michoel Schnitzler, Yoely Lebovits, Beri Weber, Yumi Lowy, Sruli Ginsberg, Yoely Greenfeld, Shloime Taussig, Yitzchak Fuchs, Shimmy Goldstein and NACHAS.