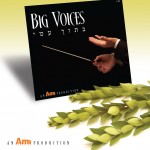 The all new issue of Ami Magazine  includes a six song CD, produced in honor of Succos, featuring the voices of Lipa Schmelczer, Yanky Lemmer, Shimon Craimer, Shloimy Zeiger and Moishy Waldner.  All six songs on the album, titled Big Voices, are original compositions by Moshe Lax, with arrangements by Shloimy Zeiger, Naftali Schnitzler and Patrick Wickham.  Big Voices will feature a contemporary take on classical music and chazanus with a Chasidic flavor and was produced by Shloimy Zeiger, who also created the album cover art.