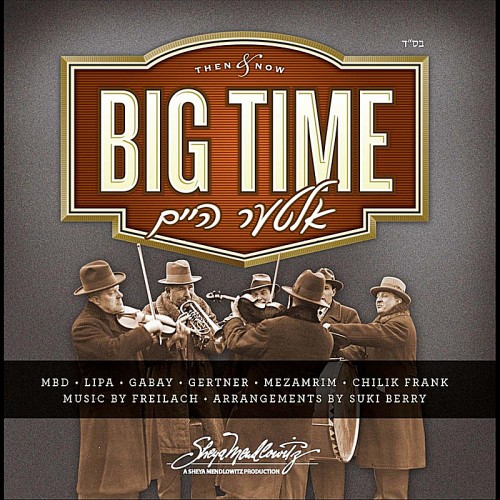 New York, NY – While much of current Jewish music seems to be incorporating many of the trends and techniques of today’s secular music, one of the biggest names in the Jewish music business is bringing back old school Jewish music with an album that fuses the feel of yesteryear withtoday’s rigorous musical standards.

Sheya Mendlowitz, the man behind the HASC concert series, the Lipa Schmelczer mega-concert known as The Event, as well as numerous albums and other full scale productions, has resurrected some of the best loved songs in the annals of Jewish music and brought them to life with an all star team of musical talent, in an album titled Big Time Alter Heim – Then and Now.

“I have been wanting to do this for a long time,” Mendlowitz told VIN News.  “The idea was to bring back the hits that many of us grew up with, good material that has been around for a few hundred years up until now.  So much of the current music doesn’t sound like what I know Jewish music to be and I wanted to bring that back.”

Big Time Alter Heim features the voices of Mordechai Ben David, Lipa Schmelczer, Dovid Gabay, Shloime Gertner and the Mezamrim Choir, accompanied by acclaimed Israeli clarinetist Chilik Frank and the Freilach Orchestra.  Produced and directed by Mendlowitz, with the assistance of associate producer Benny Taubenfeld of Sameach Music and arrangements by Suki Berry, the album features wedding, dance and march medleys and chupah selections, among others.

JM in the AM distributor Sameach Music reports that the album will be available in stores today.

Mendlowitz told VIN News to expect another musical surprise related to this album sometime next week.