The Groggers – There’s no “I” in Cherem 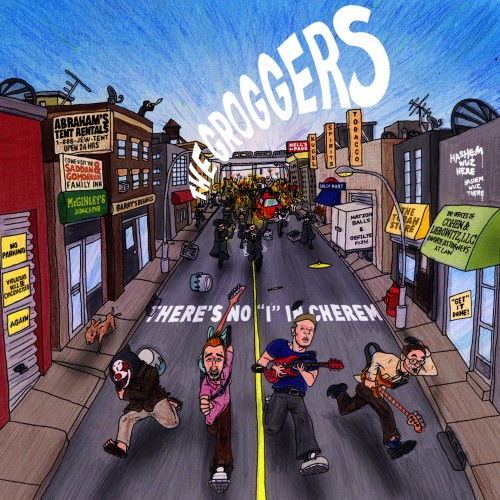 The Groggers – There’s no “I” in Cherem

Truth be told I did not anticipate liking the Jewish punk rock band The Groggers or their debut album, there’s no “I” in cherem. Experience has taught me that when Jewish bands try to emulate a specific genre of secular music it often goes awry. With a few exceptions like The Diaspora Yeshiva Band and Aryeh Kunstler, most Jewish Rock falls well short of its target and tends to be the equivalent of trying to market catsup as ketchup. Sure it has some of the basic ingredients, but clearly lacks the texture and full-bodied taste of good old Heinz 57.  It was with this expectation that while getting ready for a two and a half hour drive from Monticello to The Five Towns, that I tore open the shrink wrap and inserted The Groggers into my car CD player.

The album is filled with shrill guitars, unrelenting bass and pounding drums, packaged in melodic tunes that like it or not will be stuck in your head for days. The musicianship is flawless and the production value is impeccable. The Groggers album rivals any musical production on the market today and they succeed in being more genuine punk and rock than punk and rock itself. The lyrics are witty, funny and even poignant at times. However, don’t let song titles like “Yetzer Horah” and “Don’t play ball on Shabbos” fool you. This is not an Uncle Moishe public service announcement, but rather a subjective yet candid statement of contemporary orthodox life that is guaranteed to offend many.

Musically, the album is so well done that its unfortunate that its genre will prevent it from being fully appreciated by a wider audience. While The Groggers will not appeal to the mainstream Jewish music audience it will likely find a dedicated fan base in more secular Jews between ages of 15 and 29. Fortunately, as the band points out in their song “Upper West Side Story”, many of their target audience “always stay 29”.

The Groggers are a cast of characters led by L.E. Staiman and supported by guitar virtuoso Ari Friedman and successfully turn regular old ketchup into Heinz 57 bold and zesty steak sauce. If your looking for something with a little bit of bite to it, The Groggers debut album is a must hear and can be purchased here http://itunes.apple.com/us/album/theres-no-i-in-cherem/id460112054