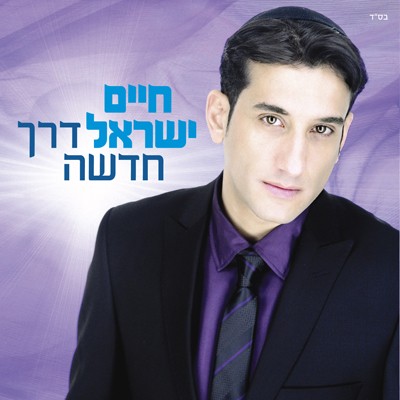 This review is long overdue. I originally hesitated to write it because I felt that I have not studied Mizrachi music, or Haim Israel’s career, well enough to comment. But listening to the album again and again brought me around to it – something needed to be said about this wonderful album – a solid 15 songs that’ll wake you up every time you hear it.

If you are not aware of him, Haim Israel is one of the kings of Mizrachi music. He has perfect control of his mellifluous voice. He projects his voice well, avoiding the nasal inflection of Sefardic singers that drives most Ashkenazis crazy. He emotes with skill, and while he has quite a range, does not overdo it on the high end. I found myself enjoying him more and more as I listened. The arrangements are kept pretty simple and within the genre, but with lots of class. Many of the lyrics are fairly typical. There isn’t that much depth or originality to most of the ideas, but the musical experience forgives him for that one flaw. Here’s the tracklist:

Chomot Shel Tikvah: A five star entry to the album. This song stands out as the best of the bunch – the gorgeous, plaintive, airy vocals blends perfectly with the guitar-based arrangements. In addition, the lyrics stand out as the best on the album. I love how he belts out the “chipasti” each time, as well as the “Gam ki eilech” at 2:41 – he’s a real pro. Great song. *****

Derech Chadasha: Here’s a Mizrachi disco piece. Just the kind of thing that reminds you of Egged bus drivers. The tune is basic, but like everything of this genre, you get into it quickly. So simple it may be, but enjoyable it is in any case. The backup vocals are just the thing to pick it up from being average to nice. This is what a talented producer can do for you. ***.5

Halaila: Another typical Mizrachi toe-tapper. This one just doesn’t have anything unique enough to lift it above the average, so if you like Mizrachi, great; if not, meh. ***

Ahavat Hashem: A snazzy beat and crisp rhymes is what makes this a standout song. It starts with some electronica before moving into the Mizrachi beats and vocals. I only wish the instrumental bridge at 2:22 moved outwards a little more. ****

Echsof: Haim Israel sings this ballad well, in spite of the weak tune. Going into the second stanza, you expect this song to build itself up further, but it never really does. One of the weaker numbers on the album. ***

Naala Naala: Why in Heaven’s name do we have a Sefardi singing in Yiddish?! Stick to Hebrew, Ladino and Arabic, guys! First Meydad Tasa, and now Haim Israel. The only savior here is the strong beat of this disco mover – while Haim Israel again blows out the speakers with some nice vocal movement. I do like the classic Shabchi tossed in, though – I only wish they sang it all the way through. **.5

Amen: This track is a hot piece – expect to move onto the dance floor when you hear this one. The disco/Mizrachi style is well pieced together – and this coming from a guy who doesn’t like “plastic” music. ****

Haolam Hazeh: After that track, we need a cool-down song, so here it is. Pretty strings and bass in the opening. But again, as with Echsof, the song needed a bit more to the composition – while the arrangements are pretty as a button. Haim Israel really knows what he’s doing though – the sweet vocals plus those smooth arrangements all the way through take a weak song and really give it what to listen to. Chaval that they didn’t give more oomph to the actual composition, though. ***

Shir L’Ima: Okay now, it seems that this is a pattern for Jewish singers – a song for your Mom or Dad! Count ‘em: Dedi (x2 – Imaand Tatti); Fried’s Father Don’t Cry; Meydad Tasa’s Ima(in English?! Does his mother even speak English?!); MBD’s Memories(okay, maybe that’s cheating – but as far as I know, it was written for his mother); Isaac Bitton/Raaya Mehemna’s Listen Mother… Did I miss any? Should we count My Zeidy, Krenitz, Brooklyn and Shabbos Now? In any case, here’s another Mizrachi mover; lots to listen to with a nice arrangement and good backup vocals. Nothing terribly unique, but just good stuff. ***.5

Bakapayim: This song is too similar to some of the other numbers on the album. Strong Mizrachi beat along with lots of classic Sefardi flavor, though, makes it another good piece. If it were up to me, I would have tossed in some flute to the arrangements – that may have helped it out with something a bit different than all the others. It’s still fun to listen to – especially on those long drives when you need to stay awake. ***

Yeled Sheli: This tune’s more Israeli pop than anything else. It doesn’t really do anything for me. **

Tefilat Hayeladim: But it’s followed by two gorgeous pieces. This track is a slow Mizrachi number, with the bouzouki-styled guitar leading the arrangements. With good lyrics, Haim has lots to work with, and he does so properly, singing personally and from deep within. ****

Ma Nevakesh: This tune, however, takes the cake, with excellent production just most of the way through. It starts off slow and calm, and Haim Israel’s voice gives a stellar performance at the bottom of his range. At 1:30, though, it moves into disco, with some great background vocals. The tune + lyrics are a great match. I do not know why they tossed in the brash Mexican-type brass at 2:39; I’d have done without that. *****

Eshet Chayil: After a song to his mom and his kids, here’s a tune (presumably) for his wife. After an intro that is basically a Mizrachi version of a Carlebach tune, which appears throughout, he breaks into the tune – which is a fairly simple piece. A bit surprising for the last track on the album. **.5

Tachlis: This is a case where more is less, and less would have been more. In other words, if they would have kept to 10-12 songs and really focused on getting the best out of those songs, the totality of the album would be even better. Even with that critique, this is an excellent album – if you like stuff with good beats and lots of movement, get it.