Lyla Byes: For Women and Children Only 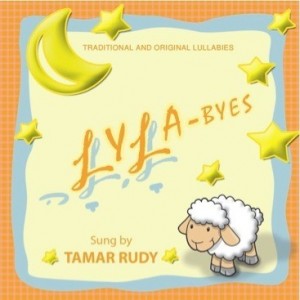 It seems ironic that JMR ran a post on best Jewish songs that double as lullabies at the same time that I was asked to review an album titled “Lyla Byes”, a bedtime CD for mothers and children by Tamar Rudy.  Featuring fifteen original and classic lullabies in addition to six bonus instrumental tracks, Lyla Byes clocks in at 54 ½ minutes, offering soothing music designed to make bedtime just a little bit easier.

Rudy, a Beit Shemesh resident has starred in several of Israel’s renowned Zir Chemed Productions, as well as being a featured guest on Rebbetzin Tap:  Get Ready for Shabbos.  Her vocals shine on Lyla Byes and the songs, a mix of Jewish, secular, classical and original songs can be enjoyed by both those who are being tucked into bed and those who are doing the tucking.

My favorites on this album?  Mimini Michael and the classical pieces.  And while I enjoyed the vocals on Lyla Byes, I thought that the instrumental pieces were especially relaxing and hopefully, conducive to sleeping.

What parent out there hasn’t been at wits end trying to get a stubborn little one to drift off to dreamland?  Lyla Byes might just be the answer to your prayers.  Check it out at mostlymusic.com.