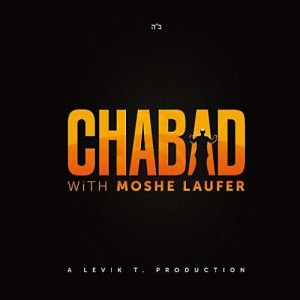 About fifteen years ago, I used to wonder why there were so few albums of Lubavitcher niggunim. I don’t wonder about that any more, because there are now dozens of collections of Chabad niggunim of varying styles and genres. Yet, I still eagerly pick up virtually any such album, primarily because of my love of Lubavitcher niggunim. I’m always eager to hear what an artist can do with an old favorite, or to hear and learn a niggun I never knew. I am critical of albums that only do rehashes of old favorites (for example, I have 8 versions of Keili Ata in my iTunes), and for the most part, this album succeeds in putting out “new” material.

Moshe Laufer is an old hand at arranging Lubavitcher niggunim – it was he who put together the classic album (ca. 1985) “Music of the Lubavitcher Chassidim”, and he also arranged Avraham Fried’s Hupp Cossack and The Baal Shem Tov’s Song. All three of those albums had great impact, by bringing Lubavitcher Niggunim to ears that otherwise may never have heard them. Laufer’s most recent such production, Chabad with Moshe Laufer, follows very similar musical lines to his previous offerings.

This time, however, unlike Music of Lubavitcher Chassidim – which was basically instrumental, this album has guest vocalists Shlomo Simcha, Mendy Jerufi, Menachem Levy, and 90’s child soloist Amit Shmulik Listvandt’s little brother, Shmulik. From a production perspective, it is very well done. The men’s and boys’ choirs both sparkle, and the mixing is superb. While for the most part, they keep to the origin of the nigunim, I will note wherever they strayed from the nusach that I know. On to the album:

1. Eimosai (Shlomo Simcha): A niggun stolen from the Yerushalmim, inlaid with lyrics from a letter of the Baal Shem Tov to his brother-in-law, R’ Gershon Kitover. For some reason, they repeat the stanza of “Mosai ko-osi mar” four times. When singing the nigun, Chassidim only repeat it twice. Shlomo Simcha sings with gusto, and it seems that the vocal power that had been somewhat lacking on Aish II is back. In the arrangements, the flip from simcha to hora at 2:40 is a bit awkward, especially considering the fact that it only lasts a few seconds. Despite that, it’s a good beginning.

Lubavitcher Chassidim talk about getting the message of Chassidus out the furthest reaches of the world in order to fulfill this “prophecy”. I got a taste of that at a Lakers game about four or five years ago, when during a time out, the PA system started blaring Matisyahu’s King Without a Crown. 20,000 people at a pro basketball game listening (and some singing along) to “We want Moshiach now/And it’s time to start revealin’…” The fact of the matter is, though, it’s about time that Moshiach fulfills that promise!

2. Lechatchila Ariber (Shmulik Listvandt): The arrangement for this unbelievable nigun sounds like it came directly off of Fried’s The Baal Shem Tov Song. However, the nigun is played too quickly, and the second stanza is repeated, when it should be only sung once. Shmulik Listvandt has a very good voice for a child, but I take two issues with his style: Basically, he focuses too much on power, and too little on natural emotion. On this nigun, however, he does a very good job of keeping everything under control.

The name of the song comes from R’ Shmuel of Lubavitch’s favorite saying: “The world says, if you can’t go under, go over. I say, from the outset, go over!” People usually mistake this to mean that when you come across an obstacle, deal with it by refusing to acknowledge that it is an obstacle. I remember a memorable farbrengen when my Rosh Yeshiva explained that in fact, the focus should be “from the outset” – in other words, when you begin something for Hashem or for Torah, obstacles simply do not exist. A space shuttle doesn’t worry about potholes on the highway!

As for the best child soloists in Jewish music? I’d go with Zohar and Meydad Tasa.

3. Horah Medley: This is a fun medley, and will certainly get lots of play on my iPod. The sound is fresh and funky, but generally stays true to the nigunim.
Ana Avda (Shlomo Simcha): I was waiting for someone to record this nigun! This fun, joyful nigun is a delight to sing, and truly expresses the Chassidic joy in being a servant of G-d. While I’m ok with what they did, some artist will eventually do more with it, especially considering the fact that the song is usually sung slowly picking up speed, going faster and faster in dizzying repetition, rather than fast and then having a semi-cantoral intermission. It works fine, though. I really like the choral work on the song.

Ochein Ato (Shmulik Listvandt): Another nigun full of geshmak – expressing joy in G-d’s infinitude. Unfortunately, Listvandt’s vocal inflections are all repetitious, which makes it sound robotic rather than heartfelt.

Mipi Keil (Shlomo Simcha): This is cheating! This is a Sefardic zemer that he Rebbe loved, but I don’t think it really belonged on this collection. Shlomo Simcha sings it in double time, but with a decent false Sefardic style. I’d expect some clapping along, and more “Hey!” shouts, because that’s what it brings out when we sing it on Simchas Torah in my shteeble. In any case, it’s another great song on a great medley.

4. Ashreinu Medley (Menachem Levy): Who is this guy? I think he has ability – he emotes the nigun properly, and he’s got good color to his voice. The keep-it-simple method works perfectly with this number, while the false ending gives it a bit to spice it up. However, I wish they would have focused on tune #1, which has never been adapted with a modern interpretation. Tunes #2 and #3 have had plenty of playing time. Besides, there’s an element of depth that the first tune gives that the others don’t – it seems to express the idea that one needs to work to internalize the beauty of our fortune. It’s a good late-night nigun.

This concept is particularly stressed in Chabad philosophy, to the extent that there are four niggunim with these words. Here are three of them.
Ashreinu 1: This mellifluous niggun is performed nicely by Levy and the boys. Nice and smooth, and well done. One small correction – when singing this niggun, the pace changes, steadily getting faster and more upbeat.
Ashreinu 2: This is an upbeat tune, often sung with alternative lyrics – Hallelu es Hashem kol goyim, during Hallel.
Ashreinu 3: Other words are occasionally tossed in to this well-known classic in honor of the Alter Rebbe’s liberation from Czarist prison on the 19th of Kislev.

5. Shabbos and Yom Tov Waltz(Shlomo Simcha): A beautiful nigun, again, with classic arrangements. This little-known tune should become a regular at many Shabbos tables. Shlomo Simcha does a perfect job with it.

6. Vayiten Befi(Mendy Jerufi): This nigun was composed for the fortieth anniversary of the Rebbe’s leadership. The pop-style arrangement is a bit too heavy for me, but I think Jerufi performs well. It fits his style.

7. Podoh Besholom (Shmulik Listvandt): Another gorgeous nigun that was waiting for its day in the sun. This one is extremely well known among Chassidim, as it is sung on the days of the release from prison of the Alter Rebbe – Rabbi Shneur Zalman of Liadi (19-20 Kislev), the Mitteler Rebbe – Rabbi Dovber of Lubavitch (10 Kislev), and the previous Rebbe, Rabbi Yosef Yitzchak Schneerson (12-13 Tamuz). Shmulik Listvandt sings sweetly most of the way through, but he shrieks on the high part at the end. They should have released him from duty at that point. The ending, besides for being weak, was completely expected – I’d have voted for a retake.

Uvyom Simchaschem: While it is sung here without lyrics, this great number is often sung to the words from Torah describing the blowing of trumpets during the olah sacrifices. Alternatively, it can be tossed in during Sim Sholom – as we do in my shteeble, after Birchas Kohanim. It’s a nigun that cries out Simchas Yom Tov!

Nigun Simcha: another easily learned, bright and lively nigun. This is the kind of nigun that you can carry with you – and it will carry you an entire day. And in this case, the pace changes and beat changes add fun and fit the totality of the medley very well.

Easily my favorite pick of the album.

9. Tiku(Shlomo Simcha): This slow and introspective nigun had always touched me. Shlomo Simcha does a nice job on it here. And again, the choir does a stellar job backing him up.

A different girsa of a similar tune uses these Ukrainian lyrics:

Roughly translated, this song says, “Our store is open to the street, without a lock, and one may do business.” “Hey, what do you have?” “I have the Chassidic discourses that begin with these words! This is our merchandise!”The message is that during Tishrei, we have the ability to “buy” and “sell”- gaining spiritual “merchandise” for the rest of the year, represented by the verses that many of the Chassidic discourses of that time of year begin with.

10. Shluchim Medley: For the finale, I expected more. Most of these nigunim are old hat, some of them done by Laufer himself.

Rosh Chodesh Kislev Nigun: This famous nigun, composed in honor of the Rebbe’s miraculous recovery from a heart attack in 1977, is sung by Jerufi and Listvandt. While Jerufi does a fine job, Listvandt is straining. However, Laufer already developed this nigun, for his album “Music of Lubavitcher Chassidim” – it did not need to be produced again. However, the choir does a noteworthy job with it.

Vaharikosi: You may know this from Piamenta’s 1990, Fried’s Around the Year 3, and others. The slapping bass line sounded like it was lifted from 1990.

Vechol Karnei: Another well-known nigun, but it’s only given one.

V’ato Omarto: Ah! A nigun that’s a fresh product. And as expected, Jerufi and Levy do a great job.

Im Esak: This is one of those nigunim that can be either fast or slow. In this case, I like the slow version better.

Utzu Eitza: A fitting finale for the album, with the lyrics lifted from the end of Shacharis. However, they don’t sing all the way through the song! This issue is compounded by the fact that we’re missing the better half of the nigun. Oh well.

Bikitzur: This is a good album, if you like standard Jewish music. My only real gripe is that it was not billed as such – aderaba; in press releases, it is billed with great superlatives, as surpassing anything that had come until now, and being absolutely unique. Not only is it not unique, it is very similar to Laufer’s earlier work with Lubavitcher nigunim. Not that there is anything wrong with that, because it is good work, but don’t expect anything new. Simply put, it’s a good album to learn some great nigunim from in a pleasurable way. I think the vocalists do a very good job with their tasks, and despite all my critiques, I think the album holds up very well.