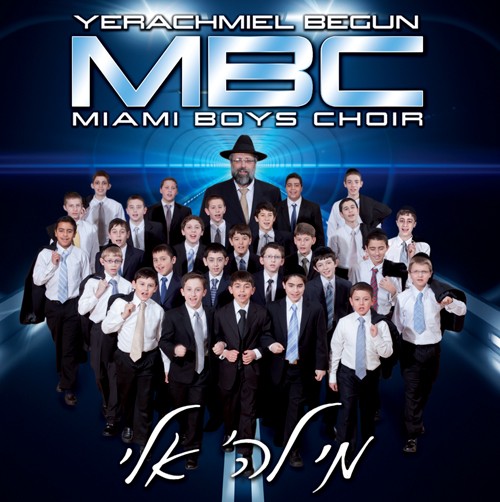 I reviewed Yavoh, which seemed liked yesterday to me, I’m surprised how fast this new album came out. I know it’s been two years, but after a successful album, you usually want to take your time and really tweak the follow up album so that it has much success as the previous one.

I see that Yerachmiel Begun followed the same format as the last album except for one slight mistake. Miami Yavoh had a killer 1-2-3 punch with Ayoim V’Noirah, Me’im Hashem & Yavoh. Only after these 3 songs did he introduce a slow song (Mheira). This time around he has Shema Yisrael, Mi LaHashem Eilai and… Yosis? Yosis belonged at number 4 behind Vtahair which is similar to Yavoh. His song order choice killed the flow for me.

Shema Yisrael– I like the combination of Hebrew and Yiddish in this song, it has the same rhythm as Ayoim V’Noirah from the last album and it’s a great opener, giving me high hopes for this album.

Mi La’Hashem Ailai– The intro is ridiculously long, but the song itself is a good song. Not as good as Me’im Hashem, the English song from Yavoh, but it’s good. My favorite part is the wordless section of this song. Towards the end, the lyrics turn into “Lai Lai’s”, and it’s very “pretty”.

Yosis – Despite my comments in the beginning, I want everyone to know that I happen to really like this song, I just think it’s in the wrong place. I know I shouldn’t pick favorites, but I like Sol Ayal’s voice the most of any of the soloists. He sings the second solo in this song. This song has potential to be sung during dinner at weddings, let me know if you hear it!

V’taher– This is my favorite song on the album. It has the same camp like, cheer song feel to it, much like Yavoh. Listen to Sol Ayal again, he has the first solo, it’s a really clear, sweet voice, without any whine or croak-like sound to it. I would definitely like to see this on the next Step-It-Up game!

Ashrai – This is hand down, my least favorite song on the album. It’s not a bad song by any means, I just feel that it doesn’t go anywhere. The best part about this song is the cool ending.

Torah Tavlin – Talk about a long song… 7 Minutes, really? Hard to find time like that unless you’re in the car or in the kitchen. This is the staple Torahdike (no pun intended) song on Miami albums. I like that Begun tries to incorporate meaningful and thought-provoking songs in his albums. He keeps Jewish music, Jewish. If you have 7 minutes, it happens to be a gorgeous song.

Oh Hashem – Of course, after the heartfelt song comes the techno beat? It’s a 5:33 second song, but the first minute is a seriously long intro. This song is fantastic. I don’t think I have ever heard a good fast English song until now. The soloists are amazing, and the harmonies are outstanding.

Hatov – This song has been in a friend of mine’s  since the Pesach concert, and now it’s finally available to listen to over and over. However, I warn you, this is a tediously slow song, but good. Thank G-d he kept it relatively short (under 5 minutes). The chorus is the real bread and butter of this song and it goes on and on and on, sounding better each time; unless you’re my wife, who doesn’t want to hear it for the 1,000th time.

Melech – This song reminds me of Galei (Yavoh) and Revach. It has that pumping hora beat, but unfortunately it’s not as good as either one of those songs. Also, there’s a part of the song where the soloist is a tad bit too high and it hurts my ears every time. It’s not his fault, he’s an amazing soloist, but the part that was given to him was a bad choice.

Ki Lecha – You have to be a hardcore Miami fan to really enjoy this one. It’s long and drawn out, much like Torah Tavlin, but it’s not as good of song, which is probably why it’s the tenth song on the album.

Ad Musai – Begun brings back the classic Miami sound with this song. It sounds as if it came off the Yerushalayim or Simcha Song album. It’s not an amazing song, but it’s nice to hear the classic sound, it make you want to listen to the older stuff.

Mi La’Hashem Ailai (Hebrew) – On this track we hear the debut of the Eretz Yisrael (Miami) Boys Choir. They sing the title track in Ivrit. Nothing Special. The Soloists are pretty good, but not as good as the American soloists.

Final Note: This is a great album. In my opinion, it’s not as good as Yavoh, but it has definitely grown on me fast. The edge it has over Yavoh is the soloists. This album has possibly the best combo of soloists in Miami history.