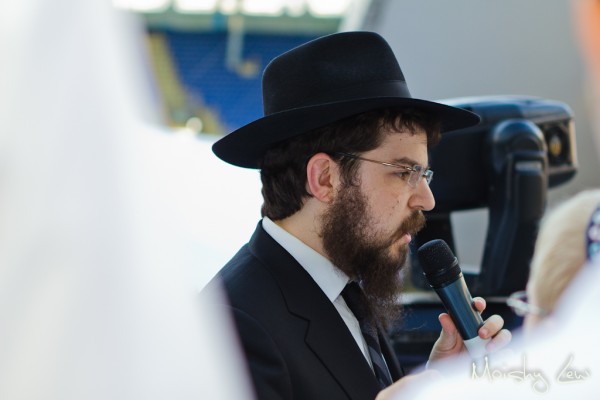 Chaim Israel wasn’t the only special guest last week at the Futerfas-Kaminetzky wedding in Dnepropetrovsk, Ukraine.  Benny Friedman was also flown out to sing at this special wedding. Benny sang at the Chupah and the first dance. Here are photos taken by photographer Moshy Lew, who was in attendance.

Here is a little information on this odd sounding city in the Ukraine and what its significance is.

The city, formerly known as Yekatrinoslav, sports a long Jewish history. By 1897, its Jewish community amounted to close to 40 percent of the population and was served by 12 synagogues and about a dozen schools.

In 1908, Rabbi Levi Yitzchak Schneerson, of righteous memory, father of the Rebbe, Rabbi Menachem Mendel Schneerson, of righteous memory, became the city’s chief rabbi. Under his leadership, religious life flourished; another dozen synagogues were established and additional educational institutions opened their doors. Many of the country’s leaders hailed from Dnepropetrovsk and were considered to be the primary power brokers in Kiev, thus increasing Rabbi Levi Yitzchak’s influence.

Full article below the photos. 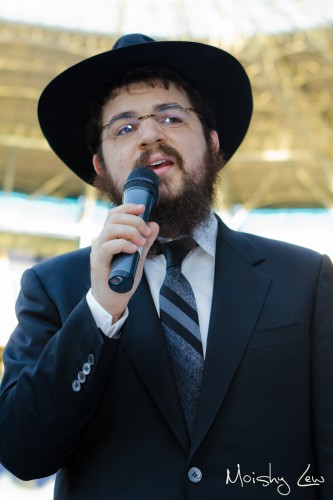 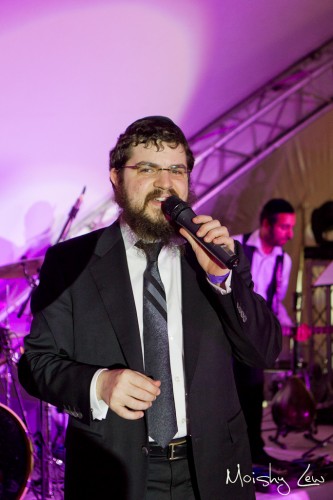 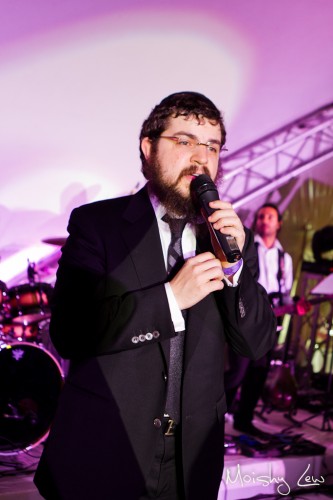 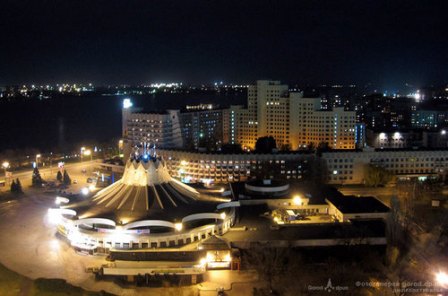 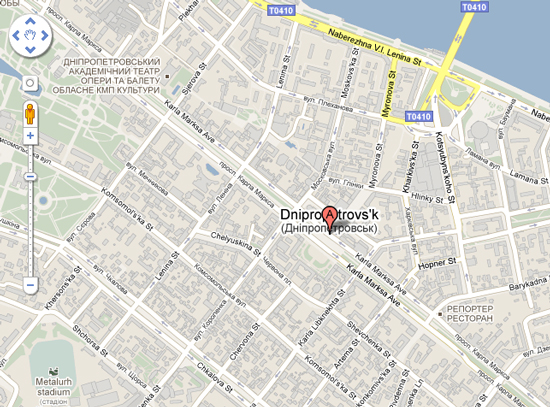 A Jewish wedding underway in Dnepropetrovsk is uniting two families whose patriarchs were once considered dissidents by the very government that now embraces the religious revival taking place throughout Ukraine’s third-largest city.

Close to 2,000 guests participated in the wedding ceremony of Shneur Zalman Futerfas and Yehudis Kaminetzky – daughter of the city’s chief rabbi and Chabad-Lubavitch emissary – as they stood under the traditional wedding canopy a short distance from the construction site of what is to be the world’s largest Jewish community center. The couple’s great-grandparents, Rabbis Avrohom Drizin and Mendel Futerfas, directed various components of the clandestine Chabad-Lubavitch school system that fueled and nurtured Jewish life behind the Iron Curtain.

In many ways, participants remarked, the wedding and the campus stand as a testament to the flames of Jewish life that emerged from the embers the two men risked life and limb to preserve.

The wedding celebration is occurring 70 years to the day since Communist authorities stormed the underground school Futerfas ran on the second floor of a shuttered synagogue in Dnepropetrovsk. The Soviets confiscated the books and, for decades afterward, Jewish education in the city was all but unheard of.

The city, formerly known as Yekatrinoslav, sports a long Jewish history. By 1897, its Jewish community amounted to close to 40 percent of the population and was served by 12 synagogues and about a dozen schools.

In 1908, Rabbi Levi Yitzchak Schneerson, of righteous memory, father of the Rebbe, Rabbi Menachem Mendel Schneerson, of righteous memory, became the city’s chief rabbi. Under his leadership, religious life flourished; another dozen synagogues were established and additional educational institutions opened their doors. Many of the country’s leaders hailed from Dnepropetrovsk and were considered to be the primary power brokers in Kiev, thus increasing Rabbi Levi Yitzchak’s influence.

But in 1919, two years after the Bolshevik Revolution, Communists gained control over the city; Jewish life, for the most part, ground to a halt while Soviets waged a war against Judaism and took over communal buildings. Rabbi Levi Yitzchak’s house was placed under surveillance and his every move was tracked by the local office of the KGB.

Still, the revered scholar and Kabbalist continued to brazenly oversee technically permissible Jewish activities that were a bone in the throat of the Communist party, and, even more dangerously, clandestinely directed a network of underground schools and other “counter-revolutionary” activities.

Upon the departure from Russia of his in-law, the Sixth Rebbe, Rabbi Yosef Yitzchak Schneersohn, of righteous memory, Rabbi Levi Yitzchak’s responsibilities grew even more. In early 1939, the Soviets finally arrested the rabbi and eventually exiled him to a remote Soviet Asian province, dealing a major blow to Jewish life in the city.

Today’s wedding ceremony was celebrated in the courtyard of Ohel Levi Yitzchak, the Jewish day school named after the late rabbi. Many of those in attendance, still bearing the scars of Communism’s anti-Jewish push, shed tears of joy during the ceremony.

Futerfas, who was affectionately known as Reb Mendel, was born in White Russia and named after his late father, who passed away during his mother’s pregnancy. He was raised by his grandmother in Nevel, and studied in the underground Jewish school system, living the life of a Soviet outlaw as he shuttled from one city to the next to escape the constant shadow of the secret police.

When he was about 13, he studied under Rabbi Zalman Moshe Hayitzchaki. He never forgot his mentor and, throughout the years, would impart pearls of Hayitzchaki’s chasidic wisdom and tell stories of his self sacrifice for Judaism. At the same time, the mentor’s son-in-law, the prodigious and selfless Avrohom Drizin, slowly began taking the reins of many underground schools.

Shortly after Futerfas’ marriage, he took over the responsibility of finding funding for the schools, which were heavily in debt. Realizing that it would be next to impossible to fundraise from local Jews, he chose to go into business, using his earnings for the benefit of the school system.

According to an oft-told story, someone once convinced Futerfas to keep some money as savings for himself, for “who knows what will be tomorrow?” He placed a portion of that day’s wages under his mattress, but couldn’t fall asleep. At around midnight, he got up and gave the funds to one of the schools.

“The students do not have any food to eat today,” he said incredulously, “and I am hiding the money for myself for another day?!”

In Dnepropetrovsk, Futerfas had met Rabbi Levi Yitzchak Schneerson shortly before the latter’s arrest. His life would follow in the rabbi’s footsteps: He too spent time in exile, banished by the authorities for refusing to capitulate in the face of anti-Jewish edicts.

He placed his life in danger to help thousands of Jews escape the Soviet Union after World War II, using forged papers to make Russian Jews appear as Polish refugees. Among those he saved was the Drizin family, who managed to escape in 1946.

Faced with the ability to escape himself, he wondered if he should remain in the Soviet Union. He asked his mother what to do.

“You already began helping people escape,” she told him. “You cannot leave in the middle. Continue on with your work and G-d will be with you.”

He took her advice and escorted his family to the train station, but remained behind to assist other Jews. Months later, with the authorities hot on his trail, he finally tried to escape to Poland, but was caught and imprisoned in Siberia for eight years.

Upon his release, he decided to move to Chernovitch, Ukraine, and stopped in Moscow on the way.

“I met Mendel in Moscow,” Rabbi Moshe Katsenelenbogen related years later. “He was still dressed in his prisoner clothing. He asked me for a huge amount of money. I was shocked, because Mendel never asked for money for himself. Seeing my perplexed face, he said, ‘Please do me a favor and get me some money.’ ”

Katzenelenbogen understood that this was quite urgent and went to work obtaining the funds. Upon receiving the money, Futerfas was overjoyed.

“Thank G-d,” exclaimed Futerfas, “now we can open up a school for the children in Chernovitch. It would have been impossible to raise the money there.”

After he opened the underground school, Futerfas turned to other aspects of the Jewish community. Realizing that the local women did not have a ritual bath, “mikvah,” of their own, he began raising the money to construct one, placing his own life in jeopardy.

“There is a Jew in Russia who’s been separated [by the Iron Curtain] from his wife and family for many years, who is nevertheless busy building mikvahs for young women… at great personal risk to his own life,” the Rebbe said in a 1962 address. “He will not derive any personal benefit from this in his own religious life… He knows one thing: When there is something that needs to get done he does it, without consideration to himself.”

Finally in 1963, at the personal request of British Prime Minister Harold Wilson, the Soviets permitted Futerfas to be reunited with his family living in London. From there, he continued to work on behalf of Soviet Jewry, and travelled the globe to fundraise for their needs.

Revival in the FSU

Back in Dnepropetrovsk, Jewish life experienced a revival with the 1990 arrival of Rabbi Shmuel and Chana Kaminetzky as Chabad-Lubavitch emissaries. Shortly afterwards, the community requested that the rabbi assume the position of chief rabbi.

When Kaminetzky wrote to the Rebbe that he couldn’t possibly accept a position once held by the Rebbe’s revered father, the Rebbe replied that he should nevertheless accept.

“In the city that I grew up in, there was nothing” Jewish, recalled billionaire philanthropist and Ukraine native Gennady Bogolubov. “It is difficult to explain to people who never lived [under the] Soviets.”

In the more than two decades since the Kaminetzkys’ arrival, a sea change has taken place. Several Jewish day schools serve more than 1,000 children. A network of programs and educational opportunities draws roughly 3,000 adults annually and a teacher’s seminary attracts 250 students from across the country. Two orphanages, a facility for children with special needs, and a retirement center help shepherd community members from cradle to grave.

“Today Dnepropetrovsk is [once again] the capital of the Jewish people in Ukraine,” said Bogolubov.

For Futerfas’ son Berel Futerfas, the trip back to his formal homeland for his grandson’s wedding was unbelievable.

“When I lived here under Communism, we couldn’t even speak in Yiddish for fear of the authorities,” he said. “All the Judaism that we practiced was done in hiding.”

He was shocked that today hundreds of young Jews participate in weekday prayer services.

“I couldn’t have dreamed of this happening,” he said.

Of his father, he remarked that the late Futerfas was jubilant when he heard that Judaism was returning to Ukraine through his friend’s grandchildren, the Kaminetzkys.

“I do not believe that he ever thought it likely that in this city, where the authorities closed his school, there would be such a huge Jewish infrastructure,” said Berel Futerfas.

Uncle of the bride Rabbi Levi Krinsky, director of Chabad-Lubavitch of New Hampshire, noted that for his own father, grandfather of the groom and chairman of Lubavitch’s educational and social services arms Rabbi Yehuda Krinsky, it was a deeply emotional experience to witness his grandchild joining in marriage with Kaminetzky’s daughter. The senior Krinsky served as a close aide to the Rebbe and observed up-close as the Rebbe ran the Jewish underground in the Soviet Union from his office in Brooklyn and, subsequently, presided over Judaism’s rebirth there.

In addition, said Levi Krinsky, tradition maintains “that the deceased grandparents of the bride and groom join and take part spiritually in the wedding.”

“The grandfathers up in heaven are surely rejoicing together with us on this momentous occasion,” agreed Kaminetzky.

“They couldn’t have envisioned this happening,” said Krinsky. “Their offspring are getting married in a city where they themselves couldn’t walk safely in the streets.”

The couple have expressed their wishes to move to Ukraine and become Chabad-Lubavitch emissaries there.

www.risu.org.uaThe items contained in the Religious Information Service of Ukraine
may be used, in part or in their entirety, by quoting the source.