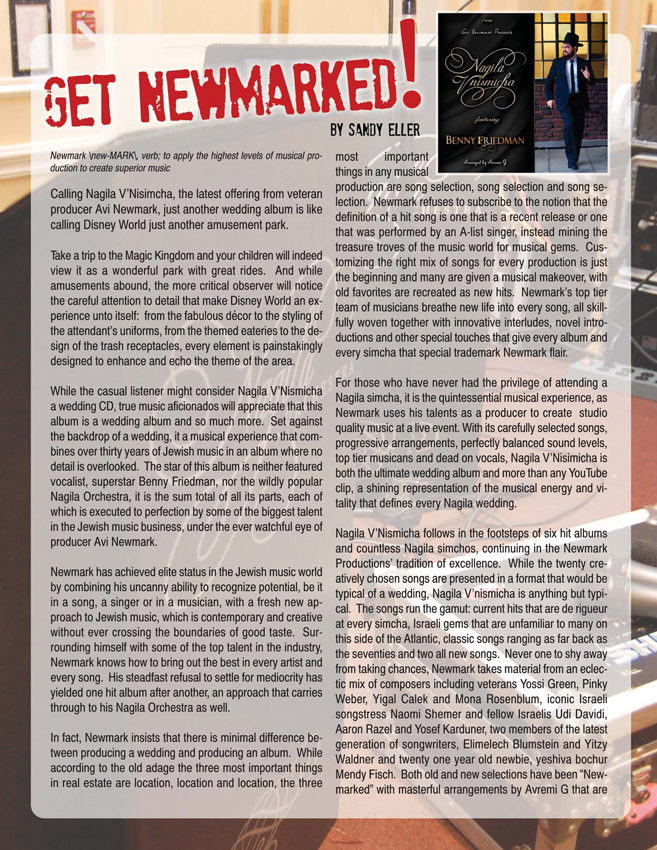 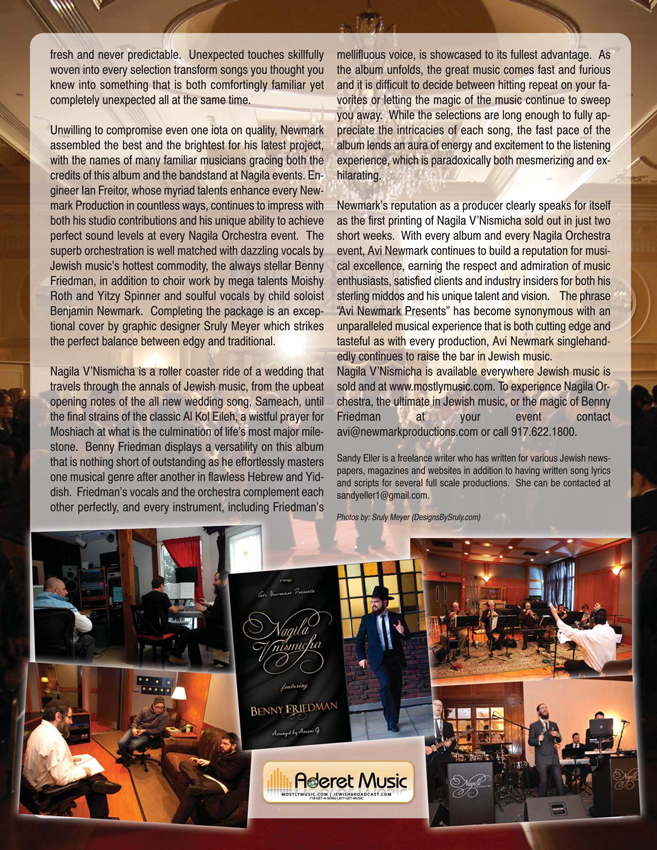 Take a trip to the Magic Kingdom and your children will indeed view it as a wonderful park with great rides.  And while amusements abound, the more critical observer will notice the careful attention to detail that make Disney World an experience unto itself:  from the fabulous décor to the styling of the attendant’s uniforms, from the themed eateries to the design of the trash receptacles, every element is painstakingly designed to enhance and echo the theme of the area.

While the casual listener might consider Nagila V’Nismicha a wedding CD, true music aficionados will appreciate that this album is a wedding album and so much more.  Set against the backdrop of a wedding, it a musical experience that combines over thirty years of Jewish music in an album where no detail is overlooked.  The star of this album is neither featured vocalist, superstar Benny Friedman, nor the wildly popular Nagila Orchestra, it is the sum total of all its parts, each of which is executed to perfection by some of the biggest talent in the Jewish music business, under the ever watchful eye of producer Avi Newmark.

Newmark has achieved elite status in the Jewish music world by combining his uncanny ability to recognize potential, be it in a song, a singer or in a musician, with a fresh new approach to Jewish music, which is contemporary and creative without ever crossing the boundaries of good taste.  Surrounding himself with some of the top talent in the industry, Newmark knows how to bring out the best in every artist and every song.  His steadfast refusal to settle for mediocrity has yielded one hit album after another, an approach that carries through to his Nagila Orchestra as well.

In fact, Newmark insists that there is minimal difference between producing a wedding and producing an album.  While according to the old adage the three most important things in real estate are location, location and location, the three most important things in any musical production are song selection, song selection and song selection.  Newmark refuses to subscribe to the notion that the definition of a hit song is one that is a recent release or one that was performed by an A-list singer, instead mining the treasure troves of the music world for musical gems.  Customizing the right mix of songs for every production is just the beginning and many are given a musical makeover, with old favorites are recreated as new hits.  Newmark’s top tier team of musicians breathe new life into every song, all skillfully woven together with innovative interludes, novel introductions and other special touches that give every album and every simcha that special trademark Newmark flair.

For those who have never had the privilege of attending a Nagila simcha, it is the quintessential musical experience, as Newmark uses his talents as a producer to create  studio quality music at a live event. With its carefully selected songs, progressive arrangements, perfectly balanced sound levels, top tier musicans and dead on vocals, Nagila V’Nisimicha is both the ultimate wedding album and more than any YouTube clip, a shining representation of the musical energy and vitality that defines every Nagila wedding.

Nagila V’Nismicha follows in the footsteps of six hit albums and countless Nagila simchos, continuing in the Newmark Productions’ tradition of excellence.  While the twenty creatively chosen songs are presented in a format that would be typical of a wedding, Nagila V’nismicha is anything but typical.  The songs run the gamut: current hits that are de rigueur at every simcha, Israeli gems that are unfamiliar to many on this side of the Atlantic, classic songs ranging as far back as the seventies and two all new songs.  Never one to shy away from taking chances, Newmark takes material from an eclectic mix of composers including veterans Yossi Green, Pinky Weber, Yigal Calek and Mona Rosenblum, iconic Israeli songstress Naomi Shemer and fellow Israelis Udi Davidi, Aaron Razel and Yosef Karduner, two members of the latest generation of songwriters, Elimelech Blumstein and Yitzy Waldner and twenty one year old newbie, yeshiva bochur Mendy Fisch.  Both old and new selections have been “Newmarked” with masterful arrangements by Avremi G that are fresh and never predictable.  Unexpected touches skillfully woven into every selection transform songs you thought you knew into something that is both comfortingly familiar yet completely unexpected all at the same time.

Unwilling to compromise even one iota on quality, Newmark assembled the best and the brightest for his latest project, with the names of many familiar musicians gracing both the credits of this album and the bandstand at Nagila events. Engineer Ian Freitor, whose myriad talents enhance every Newmark Production in countless ways, continues to impress with both his studio contributions and his unique ability to achieve perfect sound levels at every Nagila Orchestra event.  The superb orchestration is well matched with dazzling vocals by Jewish music’s hottest commodity, the always stellar Benny Friedman, in addition to choir work by mega talents Moishy Roth and Yitzy Spinner and soulful vocals by child soloist Benjamin Newmark.  Completing the package is an exceptional cover by graphic designer Sruly Meyer which strikes the perfect balance between edgy and traditional.

Nagila V’Nismicha is a roller coaster ride of a wedding that travels through the annals of Jewish music, from the upbeat opening notes of the all new wedding song, Sameach, until the final strains of the classic Al Kol Eileh, a wistful prayer for Moshiach at what is the culmination of life’s most major milestone.  Benny Friedman displays a versatility on this album that is nothing short of outstanding as he effortlessly masters one musical genre after another in flawless Hebrew and Yiddish.  Friedman’s vocals and the orchestra complement each other perfectly, and every instrument, including Friedman’s mellifluous voice, is showcased to its fullest advantage.  As the album unfolds, the great music comes fast and furious and it is difficult to decide between hitting repeat on your favorites or letting the magic of the music continue to sweep you away.  While the selections are long enough to fully appreciate the intricacies of each song, the fast pace of the album lends an aura of energy and excitement to the listening experience, which is paradoxically both mesmerizing and exhilarating.

Newmark’s reputation as a producer clearly speaks for itself as the first printing of Nagila V’Nismicha sold out in just two short weeks.  With every album and every Nagila Orchestra event, Avi Newmark continues to build a reputation for musical excellence, earning the respect and admiration of music enthusiasts, satisfied clients and industry insiders for both his sterling middos and his unique talent and vision.    The phrase “Avi Newmark Presents” has become synonymous with an unparalleled musical experience that is both cutting edge and tasteful as with every production, Avi Newmark singlehandedly continues to raise the bar in Jewish music.

Nagila V’Nismicha is available everywhere Jewish music is sold and at www.mostlymusic.com. To experience Nagila Orchestra, the ultimate in Jewish music, or the magic of Benny Friedman at your event contact avi@newmarkproductions.com or call 917.622.1800.

Sandy Eller is a freelance writer who has written for various  newspapers, magazines and websites in addition to having written song lyrics and scripts for several full scale productions.  She can be contacted at sandyeller1@gmail.com.