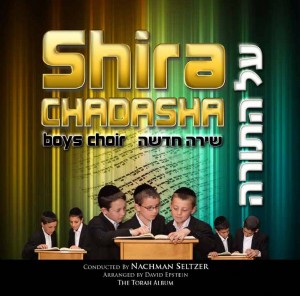 Earlier this week, I had the pleasure of meeting Nachman Seltzer at a wedding in the USA, and of course most of the conversation centered around his Shira Chadasha Boys Choir, and their latest hit album Al HaTorah. Nachman was understandably very excited to talk about his music and his choir, and gladly gave us an exclusive interview:

OOT: First of all Nachman, I would like to say that it was a pleasure to meet you and perform with you the other night. I was able to see your talents as a performer and as a choir director (with all those amazing harmonies) shining through.

NS: It was a pleasure meeting you as well OOT. Thanks about the harmonies.

OOT: Before we discuss your latest album, Al HaTorah, I was curious, how did your choir start?

NS: The Shira Chadasha Boys Choir or SCBC, began about seven years ago. There was a family in Har Nof that I knew with a bunch of boys and they really pushed me to start a choir. The rest is history.

OOT: Since your choir is located in Eretz Yisroel, I am sure that the boys all live locally in Eretz Yisroel. Are the boys from all over Eretz Yisroel or are they more centrally located? How many boys are in the choir? How do you recruit them?

NS: I have two groups as of now. One is in Yerushalayim, based in Har Nof, and kids come from what I call the Tri State Area; Yerushalayim, Telzstone and Beit Shemesh. There are about 20 kids in that group. A while back, I saw that so many kids were coming to the choir from my home town of Ramat Beit Shemesh, traveling an hour each way, so I opened up a group there which has became the main group. They were the boys who went with me to London, Paris and New York. There are about 50 kids in that group. We do have children from Beitar, have had from Kiryat Sefer and currently have one boy who travels from Afula every week, a trip of about an hour and a half each way!

I don’t recruit them. They call me. Although I was listening to my messages while in the States and there was a message from a mother who lives in Modiin. She said that her family was in the States at a wedding where Yossi Newman of YBC fame and an old friend of mine from yeshiva, heard her son sing. He said that if they lived in the states this kid would become his star soloist. He then told her to contact me in Israel. So yes, we do get kids from all over.

OOT: Wow that is pretty amazing. One more question before I ask you about the new album, I see that you have pretty frequent performances in Eretz Yisroel, you’ve come a few times with the choir to the US, and you seem to have a nice international following. What is it about your choir that makes it so special? I mean of course besides the fact that it has a multi talented director.

NS: I think when people see our choir they see the chein of kids who live in Israel. The choir sings on a truly professional level, yet you will not see or hear a hint of gaivah in their voices. People see that purity and refreshing modesty and connect with that because it is truly special.

OOT: Now onto the album, I see you are not only the choir director, but you are also the composer, producer, and vocal arranger. How much time did this album take to put out from its inception until its completion and release?

NS: I began working on this album just before last summer. Since I don’t want to overtax the kids who have very busy schedules, I stretch the recording out, with many small sessions that don’t interfere with their lives too much.

OOT: I see that the overall theme of your album is Torah, and the basis for the last song, Hadran, was Harav Nosson Tzvi Finkel shlita’s speech at the 11th Siyum Hashas. We all know that Torah is the overall theme, in our lives, but I was wondering why you chose Torah as the theme for this album?

NS: People used to do theme albums a lot more. Personally I like that concept. See my Chanuka Album and now The Torah Album. Why Torah? Because our lives revolve around Torah. It makes sense to make an album about something that has a direct influence on our lives and what more so than Torah?

OOT: Just by listening to the album quickly, I could hear that there are some really nice songs. If someone wants to get sheet music for the songs on Al HaTorah or either one of your earlier albums, is there any where for them to get it?

NS: Definitely. We will be posting our music on the SCBC Website page. Or you can email me or David Epstein directly at nachmans@netvision.net.il or dave@shemeshmusic.com

OOT: So now I am wondering, what’s next? Is the next album already in the works? Do you have any upcoming concerts?

NS: I have already begun composing for the next album. B’H going well on that front.

Upcoming concerts? Yes. We are going away for a Shabbos of music and chazzanus to Rishon Litzion next week and are doing a concert for the Abuchatzaira family at one of their simchos in Beer Sheva in the near future.

OOT: In conclusion, if anyone would like to purchase this album, or any of your previous albums, where can they find it sold?

NS: Our albums are on MostlyMusic.com, at Sameach’s Jewish Juke Box and in better Jewish music stores everywhere. You can download our music on iTunes as well and from Amazon.com.

OOT: Nachman, thank you again so much for your time and hatzlacha rabba!

NS: Thank you for your time and once again it was wonderful meeting you and your son in yeshiva and all the great people in Chicago.

OOT: The pleasure was ours!