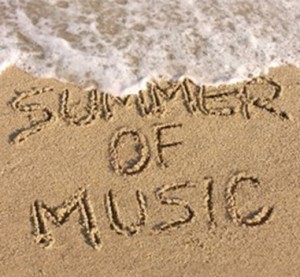 I know that prevailing wisdom in the Jewish music industry is that when it comes to music, summer is the dead season, but I just don’t get it.   I know that you guys in the industry have hard sales numbers and I don’t, but I think you are underestimating just how important summers are to your sales figures.  Maybe people aren’t buying as much music in July and August, but the summer is prime time for music.

If you have ever gone to summer camp you know that the songs you hear in camp are the ones that get burned into your head and you never, ever forget them.  Which makes me wonder if kids who come home from camp aren’t buying the music that they loved in camp as soon as they get home.

Summer of 1976.  (Oh stop laughing.  Yes, I am that old.  Deal with it.)  The music we heard most often that summer was Miami’s Victory Entebbe album.  Ask any girl who was in Camp Bais Yaakov (stop laughing!!) that summer and they will remember that the opening track, Moshe Emes, had a scratch in it and when they put on the album you got to hear some unfortunate choir boy singing the syllable “v’so” of the word “v’soraso” over and over again, until someone went into the office and moved the arm of the record player a little further into the song.  (What’s a record player?  Google it.)

Summer of (don’t know the year, but it was probably sometime in the very early 80’s):  While Amudai Shaish’s double album wasn’t released until the fall, one of the girls in my bunk had an advance copy of the album because her brother had worked on it.  Just about every song on that album was used at some point in time during that summer and Baruch Hagever fever hit Camp Bais Yaakov particularly hard.

Want me to get more current?  No problem.

Summer of 2008:  My son was in Camp Rayim and his division head was none other than Baruch Levine.  Want to guess what album they had on repeat during visiting day?  You got it.  Chosson Hatorah.  Over and over again.  Except when they paused the music to announce that you could buy the CD at a reduced price in the camp office.

Summer 2010:  The song of the summer in Camp Rayim?  Benny Friedman’s No Lyrics, which was played on the PA system and sung in the dining room, over and over again.

Campers are a captive audience.  They listen to whatever songs the office people put over the PA system all day long.  Quite frankly, I can’t think of better exposure for an album than to send a copy to sleepaway camps and let them play them over and over again.

All you singers and producers out there, take note.  Summer is just around the corner and it is a golden opportunity for you guys.  Might as well take advantage.