The Great Parade is On! 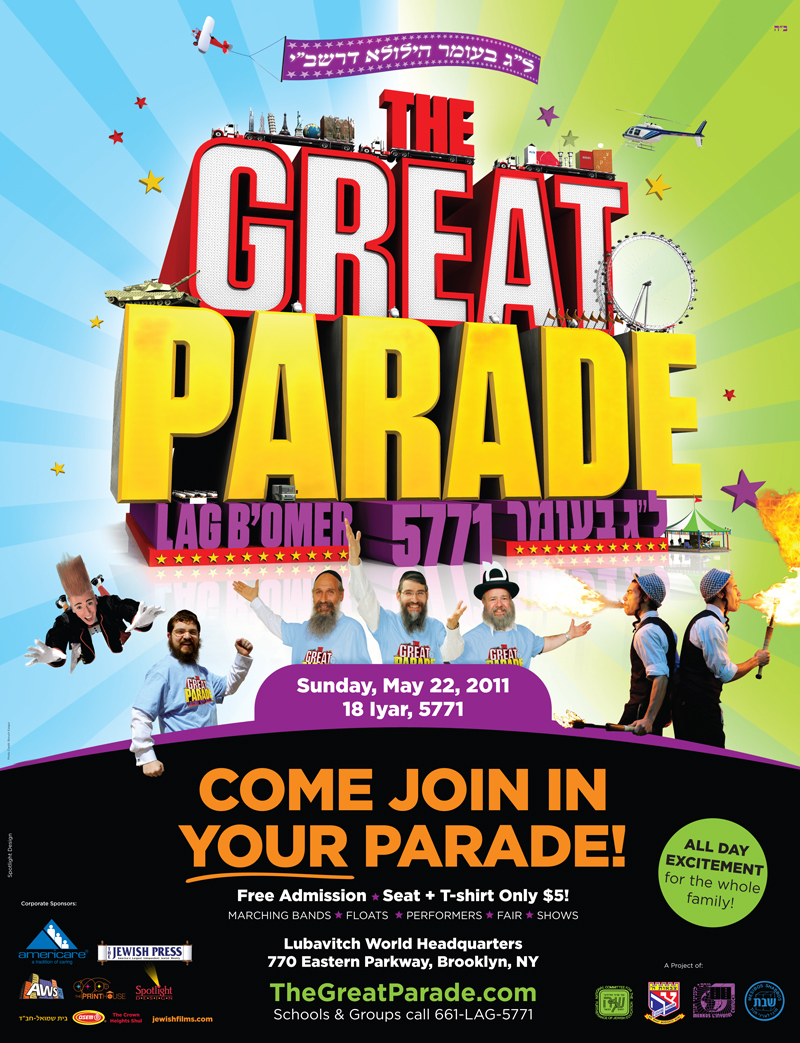 The countdown to Lag B’omer 5771 and The Great Parade on Eastern Parkway is well underway. The Marcus Brothers, known for their smash hit ‘Yalili’ have composed another hit ‘Parade, Paradin’ to promote this year’s Great Parade. It is an irresistibly fun song that captures the power and energy of Jewish unity. The video features many schools and stores in the tri-state area, well-known Jewish businesses, corporate partners of the Parade and more. With its release, and with news of additional acts and plans for the event being made public daily, excitement is building, in the run up to The Great Parade 5771.

The Parade’s main theme, Ahavas Yisroel – Jewish Unity, will honor Rabbi Shimon Bar Yochai who specifically asked that his yurtzait should be commemorated with joy and celebration. Those who joined The Great Parade last year can confirm that the atmosphere of 350,000 men, women and children was truly joyous and this year will be no different with the crowds enjoying a truly unforgettable experience.

Jewish schools are invited to take part in this extraordinary experience by signing up to be a part of the parade. They will be announced by the MC, together with over a dozen 54-foot colorful floats showing scenes of Jewish life, military marching bands, school marching bands, roaming clowns, to name a few.

During the course of the parade, the crowds will be entertained by some of the greatest Jewish music talent. Appearances will be made by Mordechai Ben David, Uncle Moishy, The Marcus Brothers of 8th Day, Benny Friedman and newest addition to the line up, Avraham Fried. They’ll perform some of their own music as well as medleys together that will resonate with people of all backgrounds.

Parades of this kind started in the 1940’s with the ‘Mesibos Shabbos’ rallies in Brooklyn which brought Jewish children of all backgrounds together, to sing, say Torah pesukim and celebrate their Jewish pride. Since then, whenever Lag B’omer occurs on a Sunday, a massive parade is held on Eastern Parkway in Brooklyn. Much work and preparation goes in to making The Great Parade the huge success is it. Four major Jewish organizations jointly care for the logistics of The Great Parade: National Committee for the Furtherance of Jewish Education, Tzivos Hashem, Mesibos Shabbos and Merkos L’Inyonei Chinuch. They work closely with the local Police Precinct and many volunteers who work tirelessly with the planning as well as the logistics on the day.

For more information, to register banners, marching bands, floats and to vote for your t-shirt color preference on the day visit TheGreatParade.com

Follow the Great Parade on Twitter: For more updates on who else is being added to the show and more. Like them on Facebook: And be entered in a raffle to win a pair of VIP tickets and $100 worth of carnival tickets. Just ‘like’ The Great Parade for a chance to win!!!