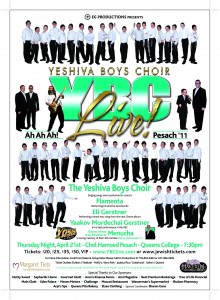 Last night I had the privilege of going to YBC LIVE! PESACH ’11 Ah Ah Ah! In other words, the latest Yeshiva Boys Choir concert. I’m going to be honest. I was very excited, and I expected it to be cute– which it totally was, but it was also much more than that. Let me start by mentioning that my last concert was a rock concert at Madison Square Garden my freshman year of college. This was my first Jewish concert, and I was anxious to see how it differed.

The crowd got excited when the orchestra started to play a medley to get the show started. I am not so into instrumental music, but this orchestra was really good! Of course, they played throughout the show, conducted by Eli Gerstner himself, and they always did a beautiful job.

Then Yossi Piamenta came out. I wasn’t too familiar with him, and I was there basically just to see YBC, but wow! He’s great! As someone who plays the guitar…wait…let me correct that…as someone who knows 2 chords on guitar… it was so much fun to see him play. I loved his Asher Bara (sounds like “Land Down Under” for those of you who remember that song from the 80s). At one point he put the guitar behind his head during a solo! The solos were all insanely good. I was sad to see him leave the stage after only two songs, but knew only good acts were to follow…

Next up was Eli Gerstner singing The Chevra’s “Yehei”. I was really impressed with his voice! Of course I knew it was good, but when you hear something on the album, it usually sounds much better than it could live. He sounded the same as he does on albums. He did a great job with this song, getting the crowd into it.

He called out his little brother, Yaakov Mordechai, to join him in singing Av HaRachamim. It’s really nice to see brothers singing together. I also love adult/kid duets where the kid sings throughout the song and doesn’t just do a 15 second introduction. They did a beautiful job. Are there any CDs where the two of them sing together? I can’t find any. Can that please be the next project if there isn’t one already???? YM has wonderful control over his voice and it’s impressive how emotional he gets considering he is still very young (just had his Bar Mitzvah).

Yaakov Mordechai then sang a song by himself, which I didn’t know, but really enjoyed. He did a wonderful job commanding the stage by himself, getting the crowd into it and just generally being a great performer. The song showed his range… we knew he could sing the high notes, but he went a lot lower in this song, too.

When Yaakov Mordechai first came out, we were told this was his last time on stage with YBC. My friend and I, throughout his first two songs, kept saying to each other that his voice was still high enough, why can’t he stay in the choir? He seems to be such a staple of it…all the way back on the very first album! 8 years! After he sang, we were told what’s happening. YM wants to focus on his learning. I’m sure being in the choir takes up a lot of time. It’s very commendable, but he’ll be missed! When the choir came out, though, I saw first hand that there are a lot of wonderful soloists, and that even though YBC will not be the same without him, they will be fine!

Eli Gerstner next sang a fun new song from the next Chevra album, which is said will IYH be released after the summer. So, get excited everyone! I’ve said this before, but how does he put out quality albums so frequently? I know I’m not complaining…

Then…the moment we’d all been waiting for…. YBC came onto the stage! They first sang Baruch Hashem, Shabichi, and Derech Sheker.

It was really cute. They dancing was more than I expected it, and the kids seemed so excited to make sure they put on a good show. But I must say, I was pleasantly surprised. It sounded just as good as the album! I was so impressed! The soloists were all wonderful…some were very young but still had great control of their voices. I wish I knew their names so I could say them, but I don’t, so good job to all of them (this goes for all the YBC songs, by the way. I’m not going to say it again through each song, but you can safely assume that this applied the whole time). Aside from the soloists, there were also some duets with twins! They had similar voices, as twins, and it was really nice, again, to see brothers singing together. They sounded great!

Next, Yossi Newman (who was great with the kids!) told us a story from the choir’s summer trip to Yerushalayim. The boys were walking through the streets singing Kah Ribon and got a great response from bystanders. And wow, I understand why. It was beautiful! The boys put their arms around eachother’s shoulders and were swaying back and forth…It seemed sort of spontaneous. The story from the trip was easy to imagine, and I am looking forward to this song on an upcoming album (is it going to be on Ah Ah Ah? It’d be great acapella).

The last song before the intermission was Shehechiyanu. It was, like the first three songs, very good and a lot of fun, especially with the breakdancing that one of the boys did!

After the intermission, I was glad to see that Yossi Piamenta came back on stage! He played two songs, including Kol Hamesameach. His whole feel was very happy and laid back, and once again the guitar is just…phenomenal. Some of YBC came out to join him, dancing behind him wearing piamenta style kippas!

From the very upbeat we went to the heartbreaking, as Shlomo Schwed & Avi Schachter of Menucha came out to sing a tribute to the other member of Menucha, Danny Berkowitz A”H, along with Eli Gerstner. They first sang Tchias from the last Menucha album, which Eli Gerstner said he wrote as a teenager and was Danny’s favorite song on the album. It was very emotional and heartfelt, and I applaud them for being album to sing so beautifully while clearly in some cases holding back tears.

They then sang “Shma Yisroel”, the most fun and exciting song from the last Menucha album of the same title, and encouraged the whole crowd to get involved (a lot of people took them up on that offer). It was, as expected, a good performance, well sung, and and a lot of fun!

YBC then came back out and sang Mizmor Shir complete with an adorable cane dance. Next was one of the parts I was most anticipating… they sang their new song, “Ah Ah Ah” . We got some singing lessons so the crowd could participate! We found out that Ah Ah Ah is for Ashrei. I loved it! I can’t wait to hear it on the new album. This wasn’t an acapella version, so I am really anxious to see how it sounds that way. The song was upbeat but laid back. It was one of those “feel good” songs, and even the security guard was bobbing his head along!

I was excited to next hear the emotional “Daddy Come Home”, which was my favorite song from the Chanukah album. It really sounded just like the album! YM did a great job singing it. It was very believable that he was the boy in the story of the song, though I hope he wasn’t because it’s sad. The choir did beautiful harmonies behind him, glowsticks in hand, and though all the fun songs were amazing, it was nice to hear this beautiful slow song.

Before the finale, the boys sang Shmoy Shel Melech. The finale started with Omar Rabbi Akiva and then went into Kol Hamispalel. The crowd was waiting for these songs, and the they were worth the wait! Shmuly Brofman from A Jewish Star joined the boys on stage, followed by more kids from the crowd. It was a great finale.

Here comes the most important part of the review, at least in my opinion. Throughout everything, what shined the most was the boys middos. When they sang solos, with their friends and family cheering in the audience, they commanded the stage and sounded great, but not one of them looked a tiny bit haughty. They are young, and they are stars! But they are so humble. They also had the calmness and stage presence of adults, while retaining the cuteness of kids! They are music stars, yes, but, like I’ve read/heard before, yeshiva comes first. The way interpret that is not just that learning is a priority, which is not a “just”, but also that mitzvahs in general are a priority, and that was clear by the glimpse of their character that I got on stage. There were little things I noticed. The boys switched around in rows, so different kids could be in the front. Lots of different kids had solos (I wish there was enough songs for them to each have a solo…I would love to hear what everyone sounds like individually!).

Overall, the concert was a great experience, and I can’t wait for the new album to come out!!!! (Heard it’s any day now…I vote for today.)