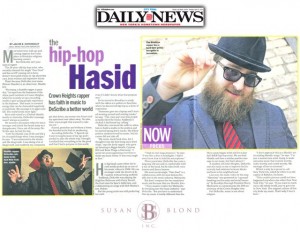 The 28-year-old hip-hop artist, who recently released the single “Pure Soul” and has an EP coming out in June, doesn’t wear gold chains or rap about fast cars, loose women and expensive booze.

“For many, a humble rapper is paradox,” he says from the basement of the Aliya youth institute in Crown Heights, where he recently set up a recording studio to give young people experience in the business. “But music is a neutral energy that can be channeled negatively or positively. My message is to appreciate life. The world needs more light.”

Born and raised in a Chabad Hasidic family in Australia, DeScribe’s message wasn’t always so positive.

He moved to Jerusalem when he was a teenager and joined the Israeli army as a sharpshooter. Once out of the army, DeScribe says, he lost his way.

“I left the Hasidic way of life and did a lot of stupid things when I was younger,” he says. “I was immersed in the streets and the drug trade. I was doing a lot of illegal stuff, and suddenly my companies got shut down, my money was frozen and my apartment was taken away. No joke, there were people that wanted to take me out.”

Scared, penniless and without a home, the bearded artist had an awakening.

According DeScribe, “I figured out I went wrong because of my ego and I needed to alter the whole way I thought. I realized that everything is for the good and that I had a purpose in this world, even if I didn’t know what that purpose was.”

So he moved to Brooklyn to study with the elders at a yeshiva in Sea Gate, where he discovered hip hop as a form of expression.

“Someone gave me a laptop and I started messing around and making tracks,” he says. “The crazy part was that people actually liked the tracks. Suddenly it clicked; I had found my calling.”

DeScribe convinced the rabbi to allow him to build a studio in the yeshiva and he started laying down tracks. His fellow yeshiva students loved his music, but his career did not take off.

“My music stunk back then, but I thought it was the best thing since fried chips,” says the burly rapper, who grew up listening to Biggie Smalls, Cypress Hill and Bone Thugs-n-Harmony. “I spent two years agonizing over how to make my music better. It was very tough at first.”

His big break came when the Israeli media picked up on one of his music videos in 2008. He can no longer walk the streets of Jerusalem without being mobbed.

Suddenly, DeScribe was playing the Highline Ballroom with Perry Farrell, the front man for Jane’s Addiction, and collaborating on songs with Bob Marley’s son, Rohan.

But the young artist was still perfecting his craft.

“I had no real stage presence,” he says. “I was like a deer in headlights. I didn’t even know how to hold the microphone.”

Three years later, DeScribe has come a long way. He not only is comfortable with a mic in his hand, but he takes both voice lessons and dance lessons.

His most recent single, “Pure Soul” is a collaboration with the most famous Hasidic Jew in the music industry, Matisyahu.

But don’t compare the two musicians’ music just because they are Hasidic Jews.

“I have massive respect for Matisyahu for breaking into the music industry,” says DeScribe. “But you have to understand that my music is totally different than his. He is a pop/reggae artist and I’m a jazz hall/R&B/hip-hop artist. We are both Hasidic and have a similar positive message in our music, but that’s about it.”

A resident of Crown Heights, DeScribe uses his music to try to improve the historically bad relations between blacks and Jews in his neighborhood.

Last year, the music video for his song “Harmony” was promoted as “a groundbreaking tool for unity and racial harmony” by Brooklyn Borough President Marty Markowitz to commemorate the 20th anniversary of the Crown Heights riots.

For DeScribe, music is not about religion.

“I don’t approach this as a Hasidic artist making Hasidic songs,” he says. “I’m just a mainstream artist trying to make awesome music that is street-worthy, radio-worthy and crowd-worthy. My message of love is universal.”

Which is why he is proud to call New York City, which he refers to as the capital of Babylon, his home.

“This creative process could not have happened anywhere else other than New York City,” he says. “If you want to reach out to the whole world, you’ve got to be in New York. The original culture of this city feeds my music. That’s why I love it here.”