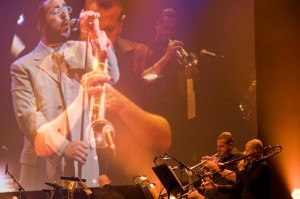 Over 1500 people from all ages packed the Kongresshaus, a major focal point of social life in Zurich, for the 14th Bi-Annual Chassidic Song Festival,  organized by Chabad of Switzerland.  The star performers of this year’s concert were Lipa Schmeltzer, one of the most exciting Jewish entertainers today, and Chaim Yisrael who offered his unique blend of Mizrahi & contemporary Jewish music.  Accompanying them was the renowned Freilach Band from New York, led by Mendy Hershkowitz, musical director of the evening featuring the incomparable talents of Avrumi Schreiber, Moishe Fried, Yossi Farkas and Nachman Dreyer.

“In a city with a population of roughly 8,000-9,000 Jewish people and over 20% of them showing up, this was perhaps the largest Jewish gathering in Switzerland,” said concert producer Yaron Levy of Pearl Productions.