FIDDLER ON THE ROOF Celebrates its 40th Anniversary 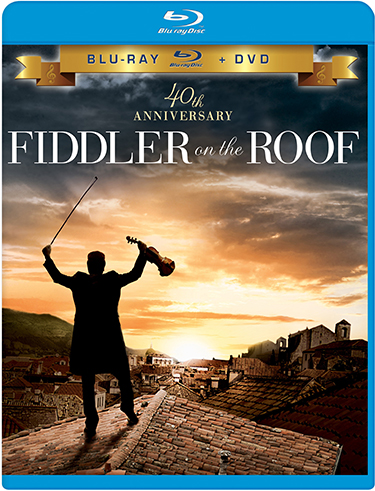 The Award Winning Musical,FIDDLER ON THE ROOF,Celebrates its 40th Anniversary!

Debuting for the First Time on Blu-ray April 5.

JMR will be giving away 4 copies of this DVD to 4 lucky JMR readers. We will be giving one away on Sunday, Monday, Tuesday & Wednesday. Please email us at jewishmusicreport@gmail.com or leave your info as a comment below to enter.

A grand tradition of song, dance, and musical splendor returns to the screen when FIDDLER ON THE ROOFdebuted on Blu-ray April 5th from MGM Home Entertainment in honor of the 40th anniversary of the classic film. Nominated for six Academy Awards® including Best Picture and Best Actor, Fiddler on the Roof is a universal story of hope and acceptance.  Fans will also be able to experience a new 7.1 audio track on the Blu-ray version, bringing the Oscar-winning music to life like never before.

This lavishly produced and critically-acclaimed screen adaptation of the Tony Award®-winning Broadway sensation tells the life-affirming story of Tevye, a poor but soulful milkman whose love, pride and faith help him face the oppression of turn-of-the-century Czarist Russia. Tevye and his wife Golde  attempt to arrange suitable marriages for their five strong-willed daughters in poignant—and often amusing—moments that celebrate life and love.

FIDDLER ON THE ROOFBlu-ray debutrecaptures the performances of such timeless songs as “To Life (L’Chaim),” “Matchmaker, Matchmaker,” “If I Were a Rich Man,” and “Sunrise, Sunset.” The film also stars Academy Award®-nominee Leonard Frey, Rosalind Harris, and Michael Glaser in hi-def 7.1 audio.

FIDDLER ON THE ROOFSpecial Features:

[THERE IS KOL ISHA IN THESE VIDEOS]