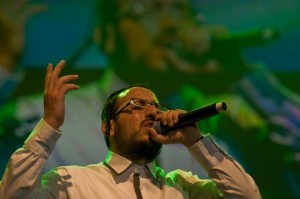 Over 1500 people of all ages packed the Kongresshaus, a major focal point of social life in Zurich, for the 14th Bi-Annual Chassidic Song Festival.

Accompanying them was the renowned Freilach Band from New York, led by Mendy Hershkowitz who was the evening’s musical director,  and also featuring Avrumi Schreiber, Moishe Fried, Nachman Dreyer and Yossi Farkas.