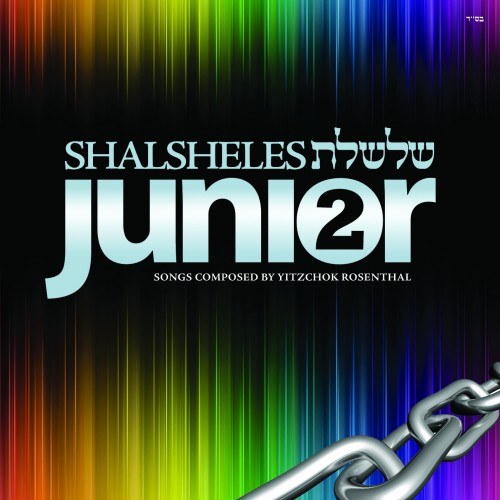 When Shalsheles 5 came out, I felt like I had to get it. The next day, I bought Shalsheles 4. Soon after, I bought Shalsheles 3….Though I have yet to get the first two (re: my music buying frenzy mentioned in my Ohad review), I have begun to consider myself a pretty big Shalsheles fan and was eagerly awaiting Shalsheles Junior Volume 2. I’m also going to mention that I’m someone who particularly likes listening to kids singing …something about the purity in it I guess. Some people don’t, so obviously, this album would not be for you. By the way, I unfortunately do not own the first Junior CD so I can’t make comparisons. I’ve only heard some of the songs, so it’s not really fair.

As most of you already know, this is an album with four soloists as opposed to a choir with a few stars in it. You get familiar with the voices and still have beautiful harmonies, and of course. It’s something different while tapping into the kids singing market which seems to be huge. It’s also a great compromise between having just one voice on an album, which can get boring, and having a hundred voices, which can get hard to follow.

The whole album has a pop rock feel to it. A lot of the choirs and groups seem to have techno sounding songs, but this is different. I like that it manages to sound like pop music and still retain the Jewish feel.

The album features Dovid Dachs (you can see him, often with his father, all over Youtube and I can’t stop listening to their Anovim…), CJ Glicksman, Edan Pinchot (also all over Youtube), and Avrumi Schwebel–four beautiful voices. While I would not say that he sings more, Avrumi Schwebel’s voice sticks in my mind more because it’s atypical. It’s a little deeper than your average child vocalist, also really velvety for lack of a better word. But like I said, the other three singers are also wonderful and the chemistry is great. Just like Shalsheles (Senior?), each of the vocalists are featured a lot, and nobody is really given better parts or anything. There is no star; it’s a singing group.

All of the songs have a similar feel. If one of the songs comes on, you’ll know its from this album (except maybe Yofyafisa). This can be a good thing– everyone needs their own style– but it also tasks the risk of it getting boring. I think the songs on this album are different enough to avoid being boring. I’ve listened to it a few times in a row now, and not getting sick of it!

Now for a brief run through of the songs.

Raninu
Fun pop style song for the opener
Definitely a sing along style song and very catchy
Achieves an important goal for the fast songs: showcase the voices, but stay fun

Aleinu
Soft and serious, but I appreciate that the singing itself isn’t slow and dragged out at all
Also appreciate that it’s not repetitive at all
Overall just a great slower song that I could imagine becoming a pretty big hit

Nar Hayesee
Probably the most pop/rock sounding song on the album, right from the start
This is my favorite fast song on the album (at the moment)
Love the part where the kids sing together with just drums (3:07)

Heyma
Beautiful voices, yes, but it’s very slow so it sounds a little dragged out
Sung with a lot of heart and feeling, really displays their voices
Too slow for what is generally my style… I’m really impatient!

Ma Tovu
Another fun pop song that I can see becoming a big  hit
I really like the chorus (I guess that’s the chorus, with the “va’ani), can hear the clarity and power of their voices
Irish sounding music throughout gives it a different feel

Shema Koleinu
Love the piano intro that is heard throughout the song as well
This is (at the moment) my favorite slow song
Almost as slow as Heyma, but I happen to think this one is much prettier so I’m more forgiving…beautiful song

Shalsheles Medley (Shalom Aleichem + Lecha Dodi + Dovid Melech)
I hadn’t heard any of these Shalsheles songs…none are from 3, 4, or 5!
All familiar, popular Jewish songs with the Shasheles spin
I like the nontraditional way that the songs transition in both cases

Ani Maamin
Lyrics remind me of the tune composed in the Shoah, so this fast pop rock version is a little hard to get used to
Sing along (and great driving) song with a lot of great harmonies
Like the other fast songs, catchy and upbeat but definitely notoverwhelming, too full, loud, etc. Easy on the ears!

Refainu
Simple, heartfelt song
The keyboardist keeps running his hands through the whole keyboard between the singing, and it sounds awkward to me
Particularly pretty harmonies (especially around 4:13), showcases the boys voices really well

Yofyafisa (from AKAPella)
Are these the same boys on the other songs? Some voices sound different…
It’s acapella style, but since it’s AKAPella you can’t really tell, so don’t excpectt the music to sound too different!
Some of you will recognize the beginning of the song, bridges, and the end from a secular song. It does fit well.
Great harmonizing between the children and adults–get such a big range here
Very different than the rest of the songs on the album
Favorite Songs on the Album
Aleinu , Nar Hayesee , Ma Tovu, Shema Koleinu

Best Things About the Album
Chemistry between the singers
Concept of the middle ground between a soloist album and a big choir
Different feel than other children albums
Excellent harmonies
Upbeat and fun feel to the entire album
Good driving music!
No song is an automatic skip…all quality songs

Worst Thing About the Album
The whole album is only around 46 minutes, and that’s including a song from another album.
Maybe because the songs are of similar style- – “wow, let’s put that one on repeat”. They are all very good, but none stood out too much.

Overall
Definitely not a disappointment for me. Stands true to the Shalsheles standard: high quality compositions and stellar voices!