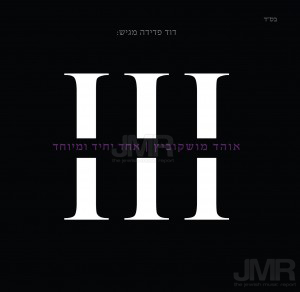 When I first heard a few months ago that Ohad was working on a new album, I started thinking how Ohad is really a unique performer in the Jewish Music scene. Most of the Israeli performers do not enjoy the publicity and success in the USA that other performers do. Ohad, however, has not only a presence, but is also highly sought after and does multiple performances in the USA, as did Dedi in his prime. It has been four years since Ohad has put out a regular album, not including his “My Music” CD. I enjoy Ohad for numerous reasons. He doesn’t have the smoothest and sweetest voice, but he has a tremendous range and an excitement to his voice that puts an extra dimension into the songs he sings. Ohad also has an advantage of being able to use a whole group of composers and arrangers who, might be well known in Eretz Yisroel, but are virtually unknown in the USA. Add to the mix his producers, David Fadida and Gershon Freishtat, and this give him a very dynamic and different sound. As the release of this album drew closer, there was one song released, Anu Banecha, and it just reinforced my feeling that something special was about to hit the world of Jewish Music. With all this in mind, I was understandably excited when the album was released. I have listened to Ohad III multiple times, and it is a very enjoyable and fresh album.

Here is a song by song breakdown of the album:

Anu Banecha- This song jumps right out at you with Ohad starting out singing only backed by drums and guitar, and having the adult and children choirs respond to his chorus. It is a very leibidik song that highlights the excitement in Ohad’s voice that I mentioned earlier. It is a really nice song that is perfect to start off the album. The song is composed by Eli Cohen and arranged as well by Eli, together with Yitzy Berry, son of the famous arranger Suki Berry.

Father’s Prayer/Birchat Habanim- A beautiful hartzige song that, I feel, the words really match the nigun. Joining Ohad on this song is child soloist Eyal Moscowitz , who sounds like a child version of Ohad, and I am assuming is related to him. Birchat Habanim is composed by Eli Cohen, who if he was unknown to us before, has made quite an impression on this album. The expert arrangements of maestro Yisroel Lamm make this quite a song.

Malchuscha- I first listened to this entire album without the cover, and I was able to pick out the song right away as an “Eli Gerstner” style song. Well surprise, he composed the song! Even though the musical arrangements are not arranged by Eli, it is arranged in his style. Eli’s backup vocals complete the song.

Mi Bon Siach- There is something about these words (or me Adir for that matter as well) that seems to bring out some of the nicest most heartfelt songs! Yitzy Waldner, who is a hartzige hit machine, composes this wonderful song

Echod Yochid- Another real lebidik song that has some really nice arrangements. It is co-composed by newcomer Eli Choen and Elie Schwab, whose name has popped up on a few new albums recently. All in all it is a very “moving” song.

Mini’i Kolech- A beautiful song with words from Yirmiyah and added explanation in Ivrit. Especially with the recent events in Eretz Yisroel, we need remind ourselves to strengthen our emunah in Hashem, who is watching over us and taking special care of us.

Tzadikim- This is another Eli Cohen composition, with, once again, the collaboration of Eli & Yitzy Berry on the musical arrangements. With the risk of sounding redundant, I love Ohad’s excitement when singing fast and lebedik songs.

Shir Haparnoso- As most of you know from some of my earlier reviews, I am a huge fan of Baruch Levine. He seems to always have the perfect words to fit the song. This is one more song to add to his credits. The only downer to this is that the second part of the song has similarities to Shloime Dachs’ Torah, but all in all it’s a real nice song.

Boi Boi Boi- A real catchy tune, but not one of my favorites on this album.

Father’s Blessing/Tefilas Ha’av- Since I am not fluent in Ivrit, I cannot comment on the content of the song. The song and lyrics are written by Yishai Lapidot. I really like Ohad’s modulation and the subsequent guitar solo at 2:52 of the song. The music intensity seems to pick up after the guitar solo, but it’s really nice how the song ends all nice and softly. This is one of the nicer songs on the album, with some really fresh arrangements.

Mashkimim- This is the one song on the album composed by Ohad himself. Of course it’s a lebidik song, which fits right in with my feelings about his talents shining on the faster songs.

Shluchim- This Yossi Green song was originally composed and sent around as a video in memory of the kedoshim in Mumbai. Since Yossi is the one who introduced Ohad to the Jewish music scene, it’s only fitting to have one of his songs on the album. It’s another real hartzige song on the album. Yossi sings part of the song, and of course, adds his unique backup vocals to the song.

In conclusion, I must say that I really enjoyed this album. Ohad is truly one of a kind in the industry, and he really does well with bringing in some lesser known composers and arrangers (at least in the USA), to create a nice but fresh album. To purchase this album please visit http://www.topjewishmusic.com/index.php?main_page=product_info&products_id=182.