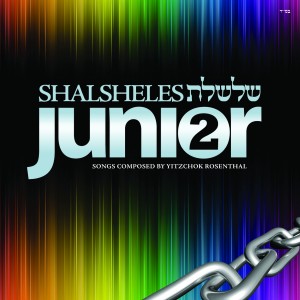 A couple years ago, Shalsheles junior really revolutionized the Jewish choir scene to an extent. While there are still many great (and a new one!) choirs putting out many fun and exciting albums, there has always been a focus on the ‘star soloists’ of the choir. Come Shalsheles Junior and pulls those few kids together and creates a group consisting of those great voices. One of the things that I really appreciated about this concept, and the first Shalsheles junior in particular, was the unique chemistry that develops within the group by the time they are finished.

As a former child soloist myself, there was something that really bothered me when I heard the first Shalsheles Junior; there was an extreme push on the kids to hit unrealistically high keys. To some degree it actually made it difficult to listen to. This can be heard on other comparable albums such as Ari Goldwags ‘Sheves Achim/Chaveirim’. That being said you really forget about these things once the album is pumping through the speakers at volumes that might damage more than your ears! (This has been a PSA…)

Before we go song by song, I wanted to point out that there is something really interesting about listening to the album for the first time. You kind of expect to have the same sound that you got in the first album, but what you hear is a totally different sound. What you have to keep in mind is that unless you record multiple albums within a really short timeframe, a change of voice is inevitable in any child. There is a slightly more mellow sound to this group that I really love. The clear standout voice in the group in terms of uniqueness is Avrami Schwebel. Avrami has an extremely silky and smooth voice that provides a real roundness to the typically high pitch voices we have come to expect. As we are used to hearing, Dovid Dachs nails anything in any range that is thrown at him. CJ Glicksman and Edan Pinchot do an amazing job putting on a performance worthy of vocalists well beyond their age!

– Edan Pinchot is the only one that wasn’t featured at the HASC 24 concert, he can be seen on YouTube singing covers to many well-known songs…

1)Raninu– This is a fun song that is a good choice as a song opener. I personally feel that while the opener has to be amazing, it shouldn’t be the best song on the album otherwise people will be left with unfulfilled expectations. This album features almost no acoustic instruments, and while this does leave me feeling a little disappointed on the slower songs – this song is a great example of how a good programmer can make a good song great. The choir parts do sound a bit empty at times but the soloists really make up for it.

2)Aleinu- I love the way this starts out… There is a real quality of vocals that is apparent during the first verse. As you can hear in the intro there is an effect that gives it an old fashioned record noise. Right before the transpose (3:18) you can hear an example of potential strain in the soloists’ voice that I mentioned in the preface.

3)Nar Hayasee- Not particularly fond of the synthesizer used in the intro – but after that you get reminded what makes Shalsheles Jr so great – a rally of phenomenal solos that are flawless. This song has an old school rock style that glows with guitar riffs that are clearly those of the arranger of this song Aryeh Kunstler. Really cool alternative style interlude 2:40.

4)Heyma- Finally a slower pace more traditional song to show the other side of the group. This is the first song that blew me away. The low part is straight up gorgeous! Edan takes FULL control of the first full round and knocks this song out of the park. I only wish they had kept it toned down and less full throughout the song. It was also nice to hear real drums come in on this song – played by the drummer extraordinaire Gal Gershovsky.

Now is probably the best time to recognize Shloimi Kaufman, who aside from singing great guest vocals on the song was responsible for the vocal arrangements on the entire album – no small feat.

5)Ma Tovu-If your waiting for the Modeh Ani of Shalsheles Jr. 2 I think here it is! It is amazing to hear what type of choir sound you can get out of only four voices! Cute Irish sounding ending, just saying…

6)Shma Koleinu- The intro sounds a little like Hashem Li Hashem Li Lo Ira, (Dveykus?) A soloist starts another beautiful song very well. Again I wish there had been a little more solo singing before the others came in, but the song is still is great and well executed. The beginning of the high part is vocally challenging, but still sounds great. There is a flash of Avrami Schwebel thrown in during the second round low part that really stands out. All in all another great slow song.

7)Shalsheles Medley- Keeping in tradition with the first album there is a medley. What I found interesting is the way the high part of Shalom Aleichem was changed a little from the original – I sorta like it! The bridge between Shalom Alecheim just fell apart. While it was good in theory the kids just couldn’t pull it off. The arrangements on the rest are really fun and exciting.

8)Ani Maamin- I’m not sure why they had to use the crowd cheering during the intro – it was used on the first song?! Either way Ani Maamin is the typical Shalsheles Jr. song and for good reason. A rock that is easy to sing along with and that’s what pulls the group together.

9)Refaeinu- This is the ONLY(!) song on the album that wasn’t composed by Yitzchak Rosenthal. I am not sure what motivated him to out this on the album, but there is a unique quality that fits in on the album because of its simplicity – The simpler the song the better the choir can adapt to it and flower it with the harmonies we have come to expect from Shalsheles Jr.

10)Yufyafisa- OK…. Not sure where to start here, I was featured as a vocalist on the album that this was originally performed. While the album was incredible and Shalsheles Jr. nailed this song (which got a lot of people really excited for the new album, myself included) I’m not sure that this song belongs on this album… Either way, I say with confidence that no other group can pull off a performance like this. The combination of groups – Akapella and Shalsheles Jr. is mind-blowing, they are flawless!

This is a great well-rounded album, and will provide more than enough for each taste. Go out and buy it before they sell out! (And if they sell out you can buy the downloadable version on Mostlymusic.com :-) )