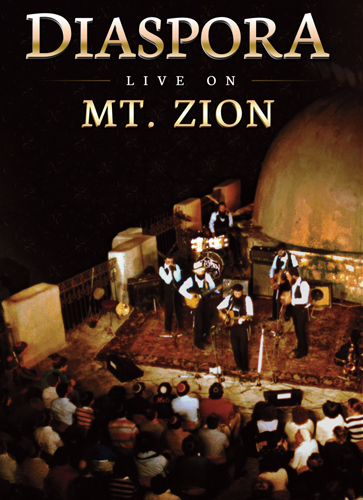 There once was a day when the music was innocent… Simple… Maybe even pure… Ever thought something like that? If nostalgia is your thing, you’ve got something coming your way.

The Diaspora Yeshiva Band was one of the most influential bands in Jewish music, as we have noted before. They were a true original in the Jewish music scene. They had a sound that was all their own, and many of their songs are still sung and played today. Diaspora’s concerts were legendary in their time. As someone who grew up on Diaspora music, I always wished for a time machine to go back and experience them as they were then.

Wish granted. Diaspora Live is a real time machine. The concert, held in 1982 on the roof of King David’s tomb, was attended by at most 150 people. The lighting, sound equipment and setup look ancient, if not down-right garage band. Yet there is a sincerity that is readily apparent that makes the DVD a delight, and not just a historical relic. This sincerity is readily apparent from the interviews with the band members sprinkled throughout the video.

After watching the DVD a few times, I realized that I can’t critique it the way I usually do – after all, it’s 30 years old, and what’s the point in critiquing something that happened that long ago?! Seriously speaking, though, the DVD has some great moments. While the band starts off a bit stiff, they warm up after about three songs, and in towards the second half, they really get into it. The tracklist is good – all the old Diaspora faves are there: Pitchu Li, Tzadik, Hafachta, The Kotel Song, Malchutcha, and others. There are even two songs that don’t appear on any album – S’iz Gut Tzu Zain a Yid, and Take Me Back to Jerusalem. The latter is particularly fun for those of us who like bluegrass – particularly with the mention of “Califor – ny – ee.” That deserves a “yeehaa” right there.

In terms of musicianship, the best solos go to Avraham Rosenblum and Ruby Harris – specifically on Hafachta and the Kotel Song, which are in any case Diaspora’s best English songs. While you can get a better feel for their skills on their recorded albums, this concert presents some sweet bluesy stuff – particularly in their representation of Lo Yareiu (from Land of Our Fathers). There’s a song that should get a modern update.

The footage is good, and the color and sound quality are surprisingly good for something so old. There are certainly a few points that remind you that you’re watching footage from the early eighties – and no, I’m not referring to the afros, tight jeans and garish sweaters in the audience. Overall, though, it is a very good reproduction. While the Carnegie Hall concert is better in terms of overall professional sound, this is a good flashback. Makes me all warm and fuzzy. Or something like that. Swell job, fellas.