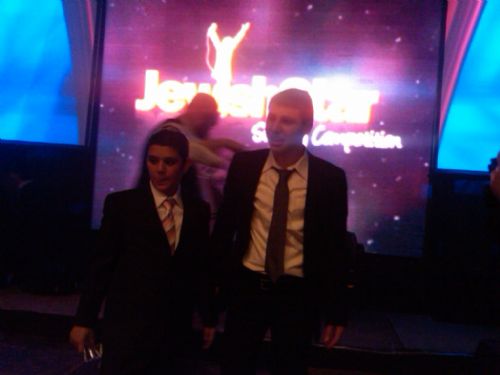 At the end of a full night of excitement and deliberation, judges announced Mendy Piamenta of Israel is the Jewish Star 5771 and Yisroel Amar of Florida is the Junior Jewish Star 5771.

Zalman Attal of France, Aaron Holder of Miami and Mendy Piamenta of Israel are the 3 finalists of A Jewish Star Season Two.

They are now performing at A Jewish Star Finals show held at the Soul II Soul concert at the Brooklyn School of Music in New York.

These talented new artists were chosen from among 10 finalists by the judges Avraham Fried, Eli Gerstner and Mendy Pellin.

Before the intermission the judges have chosen Yisroel Amar of Golden Beach, Florida, as the Junior Jewish Star of 5771.

The runner ups were Shmuly Braffman of Morristown, NJ, and Akiva Shechter of Florida.

For round two of the adult competition, the 3 finalists sang songs not of their choice but of Yochi Briskman, musical director and producer together with Mica Soffer, Yossi Soffer, Shmuly Goldman and Tzirl Goldman.

Some 262,000 votes online from 144 contestants of “A Jewish Star” singing competition has impressed Jewish music fans and industry professionals.

The competition has captured the imagination of young and old in the Jewish world.

The winners will be jump starting their careers in the music industry. Record label Aderet (MostlyMusic.com) will signing to produce and promote the winners.

Companies like Leasing Direct, VIP Israel, Watermatic and Tribul Merchant Services will be giving the winner a trip for two to Israel with hotels and accommodations, a car lease for 2 years, $1000 cash and recording time at Ruli Ezrahi studios.