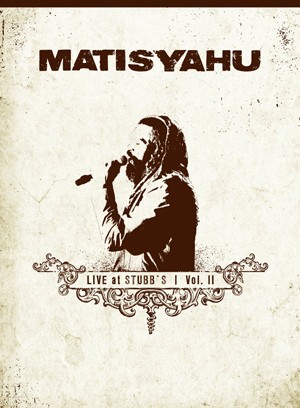 Matisyahu’s Live at Stubb’s 2 is an experience. On one hand, the acclaimed reggae artist is returning to his musical roots – live jamband, with a tint of the reggae sound that brought him into the mainstream; at the same time, he brings in his newer sound, showcased on Light – live electronica with hip-hop influences. His new band, the Dub Trio, feeds him with this eclectic mix. Of the trio, the drummer is really talented. While the guitarist and bassist certainly know what they are doing, their work didn’t jump out at me like the drummer’s.

However, I’m not going to pretend as if I actually “get” them – I’m really not a big fan of electronica, and I don’t connect with their solos. They have their moments – don’t get me wrong. The best description I can manage of their sound is that it is a clash of dissonance and mesmerizing, hypnotic trance-like music. I liked his original band – Roots Tonic – better than these guys, but that is simply because I liked the original rock/reggae sound better than the hip-hop/electronica sound. But a few times through the tracklist gave me a certain appreciation for the album.

Based on the tracklist, Matis exhibits none of the struggles that he portrayed in Light. He seems to be in his own positive spot – he sings his original compositions, as enthused with fresh Baal Teshuva-hood as they were originally, with ease. His natural sincerity is there for all to see.

Personally, Stubbs 2 makes the most sense on the DVD. It is there that you can see the power and energy of the live show that pulsates through the crowd and back to the performers. Besides that, it includes an interview with the musicians, which gives you a personal glimpse of them, and allows you the experience of hearing from the musicians themselves what they’re trying to do.

Another point: It’s a lot easier to critique a live album than a studio album, because you already know and love the songs that will be sung on a live album. And when the artist wants to tweak the song (as they do here), that’s going to mess with as you know the song already. With that in mind, here’s my take on Stubb’s 2:

1. Kodeshstarts with a unique beginning – you can either call it cute, strange or annoying. And my personal take varies. Matis has his two boys repeat the words of a song, followed by Shema. This must have been adorable at the concert, but on the Ipod, meh… He follows that with the Alter Rebbe’s Tzamah Lecha Nafshi*, and goes back to one of his all-time best songs, Got No Water (from Shake Off the Dust).

* And what is the Baal HaTanya thinking about this? Is it the ultimate of “yafutzu mayanosecha chutza” – the wellsprings beings spread as low as possible? Or is this just inappropriate? I go back and forth on this one…

2. Time of Your Song(Youth) is the best song on the album – it stays close enough to what I enjoyed on the original, but with enough creativity to make it hold up on its own. It starts off with a garbled but throbbing guitar and holds the pace (and style) all the way through. I found it similar to the version of the song I bought on Itunes years ago, on Live at Austin City Limits; here, though, the quality is higher. Simply put, the song rocks.

3. Mist Riding (Youth) is much better in the original – especially with the beautiful Caribbean drums at the end. Here, it takes on a more rap/hip-hop expression, which isn’t really to my liking. I just don’t understand the combination between what the guitarist is doing and what Matis is singing – it’s a casual cacophony, and confuses my musical sensibilities. This is also where they start the real electronica shtick that sounds like a robot sci-fi soundtrack from the 80’s. I dunno.

4. Darkness Into Light (Light): Matis starts with his gorgeous falsetto. He revels in this number and belts it out throughout, especially at the end of the track. I still don’t get the alien chirps in the background. Matis adds some new verses to the song, starting with a verse from Tehillim in the middle, which is nice. He also uses rapid-fire rapping on lyrics from Chop ‘Em Down (Shake Off the Dust).

5. Youth(Youth – duh) – this track is actually a medley. It takes a while to get started – which is kinda cool. But the guitar solo doesn’t quite do what Dugan’s did – it’s just chaotic. They follow that with more sci-fi/video game stuff. At 6:00, Matis moves into phrases from Heights (Stubb’s), and then to a quiet, gentle version of Aish Tamid (Shake Off the Dust). His singing almost sounds like a jazz vocalist at times. He moves back to the hip hop world soon enough, though. So this track of interminable length goes back and forth – it has its moments.

7. Two Child One Drop (Shattered) – Yehuda Solomon takes his place on stage to help out on this number, as in the original. Solomon is a talented guy, and I hoped he’d take a more active position in the vocals on this one. He just shows up randomly in the song. The arrangements from the band here make more sense – the creepy, nightmarish music sifting through Matis’ gentle, solemn crooning. Towards the end of the track, they move into Exaltation(Shake Off the Dust), and some random pesukim from Tanach. (Unless someone can explain what their relationship with the song is.) With all the critique going on, this is one of the better songs on the album.

8. Open the Gates – yeah! A NEW song – and in the old reggae style! Great lyrics, great performance on this one. Classic Matis! As he finishes this song, he shifts over to Bob Marley’s Rastaman Chant. (You can hear another gorgeous version of this one on his Live in IsraelDVD, from his No Place to Bepackage. It opens the concert there, so it’s even more powerful. Here the band keeps it low key, but it’s still pretty.)

9. One Day (Light): What’s there to say about this classic?! Just a great song, and while the guitar solo at the end of the song is not conventional, it’s unique sound is sorta cool, even to my ears.

10. Motivate(Light) – Too bad they didn’t pull Yossi Piamenta onto stage for this one. More specifically, the beginning of the song goes straight for the electro-sounds. Think of it as what it would sound like if your personal spacecraft was attacked by laser-gun toting humanoids in a galaxy far away.

This album is going to please anyone who enjoyed Light. I’m going to paste 3 stars on it. It’s not going to get much complete playtime on my Ipod; but when the songs that I enjoy will pop up, I’ll turn up the volume. At the end of the day, Matisyahu is a talent that keeps pulling me back.