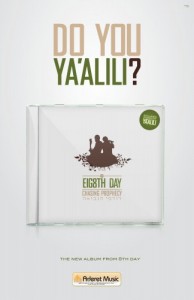 I would like to begin by saying that if you asked me a month ago about 8th day I would not have been able to tell you anything more than the fact that they are Avraham Fried’s nephews. I heard that they performed at this year’s Ohel Concert and that they were the highlight of the entire evening, but that still didn’t pique my interest. Then a few weeks ago I got an email from Oorah with a music video of theirs singing their “It’s Shabbos Now” and while I didn’t understand exactly why Oorah was sending it out (at the time I didn’t know that it was on last year’s Shmorg CD)I thought it was a nice song. So when I saw they were coming out with a new CD I decided maybe I should listen to it and maybe I’d like it. I have to admit that I’ve been missing something by just starting to listen to them now. I was hooked by my 1st time listening, and all I can say is “Yes, I Ya’alili!” It is a very refreshing and enjoyable listen. A friend of mine described 8th Day as Journeys with sweeter voices and a more modern sound. While I would be very hard pressed to compare anyone to the immensely talented Abie Rottenberg, I must say Chasing Prophecy has not only nice songs, but meaningful lyrics, for the most part. I will try my hardest to not only comment on the songs themselves but the lyrics as well.

Here is my song by song analysis:

Ya’alili- What a way to start off the album with a BANG! This is the song that took the Ohel concert by storm, and by listening to it I understand why. While I have a couple of different interpretations to the song, I will not share them since I don’t know if either one is what the Marcus Brothers had in mind. I think this song highlights not only both Shmuel and Bentzi’s voices, but it also highlights their awesome band and musical arrangements as well!

Emosai- This song is a real easy and smooth listen. As performers, Shmuel and Bentzi have the opportunity to reach out to many different types of Jews. This song as a very simple and direct message whose words they are preaching and spreading.

Avraham- This is a beautiful and sweet song about Avraham Avinu. I have always believed that a nice hartzige song is the best way to highlight beautiful voices and the vocals and harmonies on this song are top notch.

Smile- This is another slower tempo song, but Smile is a bit more upbeat and has a rock feel to it. As Shmuel and Bentzi are both Lubavitch Chassidim, their songs have a very strong underlying theme to bring people closer to Hashem and Yiddishkeit. Getting people to smile, especially through music, definitely helps.

Tatenyu- After three slower songs, this up tempo song really hits the spot. It’s a really straightforward song about Jack (otherwise known as Yaakov Halevi) looking for the truth, and finding our father in heaven. Tatenyu!

Chasing Prophesy- This is the title track of the album. The Marcus Brothers really branch out on this song, with an honest to goodness swing beat! This is a song about chasing our dreams and working hard. This song has some real nice arrangements and instrumentation.

8th Day- This is another Rock ballad, and I believe the essence of 8th Day. When the day comes we’ll all be ready and waiting! I love the mention of my hometown Chicago!

Yiddish Country- 8th Day has gone country! Raison d‘être is a French phrase meaning “reason for existence” and this is another cute song that again shows the purpose of what 8th Day’s music is all about, and for that matter, the true purpose of music, to bring us closer to Hashem.

Beggar Women- This is an old Moshe Yess song, which 8th Day dedicates to his memory. After listening to the original work by Moshe Yess, I think they do the song justice.

Play Your Music- Just hearing the guitar solo at the beginning of the song tells me we are in for something special, and this song doesn’t disappoint. This is another one of their songs with the same central theme.

Yiddishe Mama- This is a Mumbai tribute song. Once again I think both the musical and vocal arrangements are unbelievably special.

It’s Shabbos Now-What more can I say about this song then it’s what turned me into a huge 8th Day fan? It captures what Shabbos is supposed to be, and how we all feel on that special day.

In conclusion, this is an album that every Jewish Music fan should buy and I know you will enjoy listening to it over and over like I have. I know my next move it to get their other albums so I can catch up. You can buy or download the CD here: http://www.mostlymusic.com/rodfei-hanevuah-chasing-prophecy.html