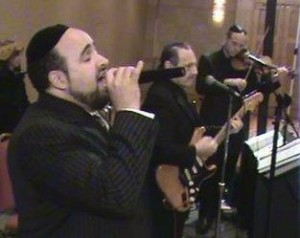 Avraham Solomon, owner of perhaps the only Orthodox orchestra in Texas,  has been in the music business since his days as a star soloist with the Miami Boys Choir and was featured on several albums including Torah Today and Miami Experience #1.  Solomon returned as a member of The Alumni at  Miami Experience #5,the first Nassau Coliseum concertandbegan singing at weddings right out of high school, in addition to performing  with several a capella groups, including the Shabbatones and Kol Zimra.

Married and a few kids later, Solomon  left New York for Houston, Texas, a much smaller community, with nothing in the way of  live Jewish music. A piano player since  age ten, Solomon began performing as a one-man-band. After performing at a few functions in Houston, many started to appreciate the idea of having musical accompaniment as a way of adding class and entertainment to an event. As time progressed Solomon has teamed up with many other musical Houstonians and has performed with them professionally, allowing him to start offering more than just a one-man-band. Solomon has performed at several weddings, bar mitzvahs and shul events since his arrival to Houston less than two years ago, with one of his performances landing him a write up in Houston’s  Bridal Magazine. Although he does perform in Texas, Solomon also performs worldwide.

For audio and video clips you can view his website at www.LiveJewishMusic.com and for bookings call him at 832-303-1KOL (1565).

For a clip of his performance with his band LiveJewishMusic.com in New York,  click here.