REVIEW: Zevi Kaufman – Music: The Language of My Soul 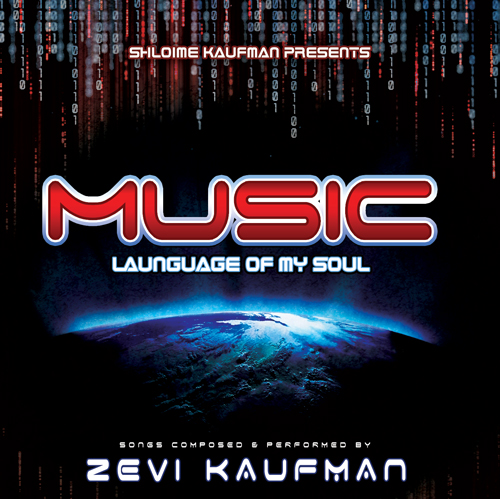 Zevi Kaufman is a newcomer on the scene of Jewish music. If the last name sounds familiar, that’s because it belongs to singer Shloime Kaufman, Zevi’s cousin. Zevi has a mixture of styles on his album ranging from yeshivish to borderline Jewish music. He does push the boundaries on some songs, but no more than artists like Eli Gerstner or Matisyahu do. What’s interesting to note, is that the “yeshivish” sounding songs were composed by Zevi’s father, while the rest were composed by Zevi himself.

For me, the album had its up and downs. The compositions are absolutely stunning and so are the arrangements. It was Zevi’s voice, which I thought was great the majority of the time, but has a tendency to be whiny sometimes. With that said, I still believe the album is worth buying even if it’s just for the quality of the compositions and music.

Ma Tovu – Everyone has to have a “Ma Tovu” on their album, right? Kaufman’s intro song is rocked up and comes out of the gate with a bang. His vocals on the refrain are stunning and the chorus, although a little whiny, is still good. The song itself is a bit repetitive, much like the redundancy in the words in this sentence. Zevi throws in a auto-tune sounding 3rd part of the song at 2:37, which is the high point of the song, followed by a rock solid guitar solo.

Nafalti – Nafalti is easily the best slow song on the album. It starts out sounding like a typical slow tempo, but then out of nowhere at 0:37 the tempo picks up to more of a jogging beat and I gobbled up every second of this song, besides one small part, which I’m sure you can guess if you’ve heard this song before. The arrangements, lyrics and vocals are top notch in this song and it’s by far Kaufman’s most talented composition. In the middle of the song, Kaufman decides to go into a reggae sounding piece, which threw me off and I’ve learned to appreciate, but I still think is unnecessary. Shloime Kaufman’s vocals for the last thirty-two seconds of the songs are outstanding.

Music – The title track has some great lyrics, there are just some parts of the song that which I have trouble with, mainly the part that bridges the refrain and the chorus (1:52 – 1:58). Also, Zevi’s father’s voice seems to be out of place. It almost sounds as if it was recorded at a lesser quality. Lastly, the song is a bit long at six minutes and thirty-three seconds. It could have been two minutes shorter and had been perfect.

Shomer Yisroel – This song has a striking resemblance to Shomer Yisrael from Vhavienu 3, which featured Aryeh Kunstler, the arranger behind this track. However, this is a bit different and is a faster paced version. The acoustic guitar on this track sounds fresh and is a pleasure to the ears. Everything about this song screams goodness. From beginning to end, I have no complaints and only praise.

Clock – A great composition. Amazing lyrics. Amazing vocals by both Zevi and Shloime Kaufman. But what’s with the abuse of auto-tune? Shloime sounds good with the auto-tune, but it increases Zevi’s whine. Why not just use it on one part of the song? Why the entire song? It’s such a beautiful song and has a great meaning. I would like Zevi and Shloime to re-release this song without the auto-tune.

Pischu and Lecha Dodi – These two songs were composed by Zevi’s father*. They are beautiful shabbos table songs, but they seem out of place on this album. It’s a completely different genre and it doesn’t suit Zevi’s voice as well.

On My Way – Hello Aryeh Kunstler! This track sounds like it was ripped off of one of Kunstler’s two albums and that’s a good thing… a really good thing. Kunstler does guest vocals in addition to the arrangements and guitars and everything else. Zevi’s vocals even have that “Kunstler rasp” sound on his voice. This song is hands down the best song on the album. Everything just flows and fly’s and all those other good words. There’s nothing to criticize on this song… I’m just sayin’.

Akavia – Arranged by Ian Freitor, it’s quite obvious that there was a master arranger behind this song. The refrain has you feeling the beat in your heart and the rhythm throughout your body. Then it just flows into the chorus which takes you to a higher realm of music; I’m talking about high quality here. This song is a close runner up to number one on the album. The track’s freshness and liveliness has a great beat that keeps you going and makes you want to dance. It would be nice to see this song featured on “Step it Up – The Jewish Dance Game“. Perhaps when they put out a second version. Finally, Zevi’s younger brother, Yechiel, sounds amazing!

Closer – This song encompasses the entire album, hence the name “closer”. It’s making a statement; that this album is different than your typical Jewish music album. Zevi Kaufman has set a new style and has followed in the footsteps of Benny Friedman’s debut album. How so? Both albums delivered fresh and exciting tracks with amazing lyrics, arrangements, etc. There was no recycling of old songs. For me, this album, along with Benny Friedman’s debut album, which are two very different genres, set the bar for the rest of the JM world.

Zevi didn’t hold himself back with these tracks, neither should you. As a Jewish music lover, this album should be a part of your collection. Go out and buy it or download it from mostlymusic.com

Make sure to check out a new single “Final Say” released by Zevi Kaufman, which you can download for FREE from mostlymusic.com.